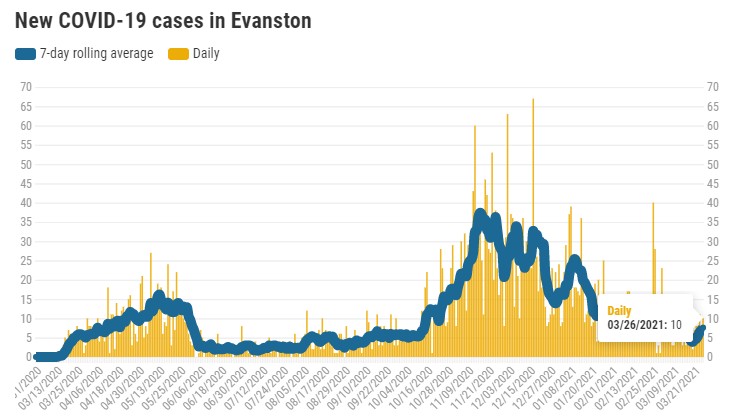 Evanston health officials reported 10 new COVID-19 cases in the city today, up from seven yesterday. The city’s coronavirus death toll has remained unchanged for more than three weeks at 114.

The state today announced a delay in further relaxation of COVID precautions as a response to the increase in test positivity and hospital admissions. It also said it plans to deploy rapid response vaccination teams to areas seeing an increase in cases to try to speed vaccine administration.

The Illinois Department of Public Health today reported that 126,710 people were vaccinated yesterday. The seven day average is down slightly from the level of a week ago.

A total of 5.28 million vaccine doses had been administered as of yesterday, about 79% of the total 6.6 million doses distributed to the state by the federal government. The IDPH says 15.41% of the state’s population is now fully vaccinated.

Reported COVID-19 deaths in Illinois declined yesterday, but the seven day average is up from a week ago.

The number of COVID-19 tests reported declined today. The seven-day test average is about the same as a week ago.

The IDPH reported tests of 345 Evanston residents today, compared to 1,081 yesterday. The IDPH found 17t positive cases here for a daily positive rate of 4.9%. The seven-day positive rate is up from a week ago.

As of last night, 1,302 people in Illinois were reported to be in the hospital with COVID-19. Of those, 264 patients were in the ICU and 120 of those were on ventilators.