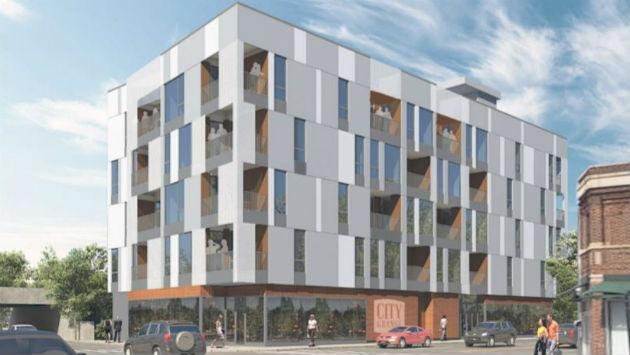 Plans for a proposed five-story, 26-unit apartment development at the corner of Chicago Avenue and Howard Street were approved by Evanston’s Design and Project Review Committee Wednesday.

At one point planned as a seven-story building, the Evanston Gateway project was approved for a $1.9 million forgivable loan from the neighborhood’s tax increment financing district by the City Council last July but the Council denied a request for an additional $1 million to include four extra units of affordable housing.

At that time, the Council also approved sale to the developer of a city parking lot on the site.

Developer David Brown’s latest plans for the five-story building call for a retail garden center on the first floor, 26 one- and two-bedroom apartments on the upper floors and a green roof with a deck for residents. 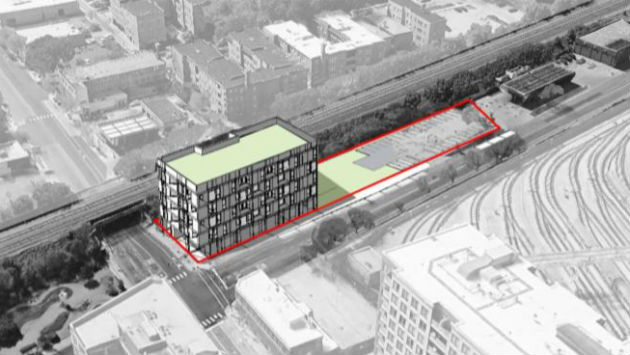 Between the parking lot and the building is an outdoor garden sales lot. 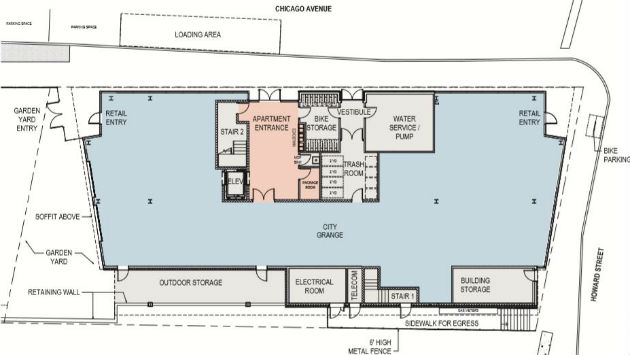 The U-shaped retail space on the first floor includes entrances from Howard Street and Chicago Avenue and will include a café as well as City Grange, the garden center.

The loading area has been moved from Howard Street to Chicago Avenue, also in response to staff comments.

Brown said there are also plans with METRA for beautification along the embankment as demonstration gardens.

The project will include five on-site affordable housing units, three with one bedroom and two with two bedrooms, targeted to people earning no more than 80 percent of area median income.

City Engineer Lara Biggs suggested that the developer replace of all of the sidewalk along Chicago Avenue to improve the appearance and sidewalk drainage, rather than just patching as needed.

In addition the committee asked the developer to add a parking pay station and put in pavement marking as a public benefit.

Asked about the timeline for the project, Brown noted that he hopes to finalize purchase of the city lot on the site within four to six weeks.

The project is now scheduled for review by the Plan Commission on April 18 and will also require final approval from the City Counci.