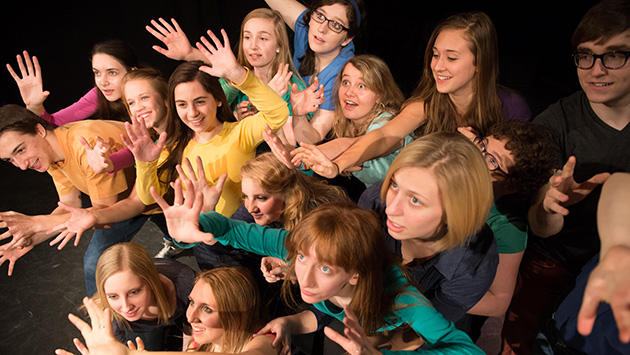 Highlighting improvisation and story theatre form, the Young People's Company includes Piven’s most advanced high school students who work as an ensemble over the course of six months to create original adaptations of stories.

The company will perform for one week at the Piven Theatre Workshop, located in the Noyes Cultural Arts Center in Evanston.

This year’s line-up of stories celebrates the company’s long history of unique adaptations and includes an adaptation of Dorothy Parker’s The Standard of Living.

The story, adapted by Joyce Piven and directed by Mikalina Rabinsky, follows two young stenographers who joyfully, and fiercely play a game which stems from the question, “what would you do if someone left you a million dollars?”

Also featured is The Blue Rose, directed by YPC Director and longtime instructor and theatre artist Rebecca Kling. The piece is an adaptation of a folktale which follows the journey to discover how a blue rose can help win the heart of a princess.

The production concludes with the adaptation of The Swineheard, directed by Joanne Underwood and Arachne adapted and directed by Ethan Ucker.

Swineheard is a classic retelling of the Hans Christen Anderson story of a poor prince who seeks the hand in marriage of the Emperor’s daughter. Many princesses would say, “Yes, please!” in a heartbeat, but whether the daughter of the Emperor does remains to be seen.

Arachne is an adaptation of the Greek myth about a boastful weaver who dared to attest that her skills exceeded that of the Goddess Athena. In retaliation, Athena turns Arachne into a spider, doomed to weave for eternity.

With a strong foundation in story theatre training, students are given a professional experience exploring the levels and depths within not only the characters but the narrative as well.

Tickets, available online, are $15 or $10 for students with ID. The Saturday matinee is "pay what you can."

Performances are at 7:30 p.m. Wednesday through Saturday, with 2:30 p.m. matinees on Saturday and Sunday.