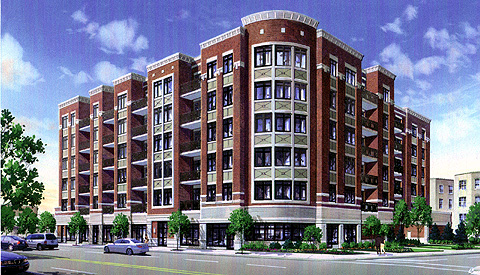 Neighbors will get a chance to air their objections to a proposed six-story condo building at 1001 Chicago Ave. at a Plan Commission hearing Dec. 13.

Neighbors will get a chance to air their objections to a proposed six-story condo building at 1001 Chicago Ave. at a Plan Commission hearing Dec. 13.

A revised rendering of the 1001 Chicago Ave. project.

The commissioners last week agreed to a request from Richard Weiland, the long-time owner of a single family home across the alley at 1012 Hinman Ave., to postpone testimony from the opponents to give them more time to prepare.

At last week's hearing, architect Matthew Haylock of Haylock Design said he's made some changes to theÂ building plansÂ — including using brick for the cornice and providing inside access to the trash area for the first-floor shops.

He said he's also met with city staff to make sure that the landscaping around the building will match the city's overall Chicago Avenue streetscape plan.

He said that in response to earlier comments by the commissioners he's raised the height of the storefronts by about a foot, to 9-feet-8-inches and changed the color of the window frames from white to black "to enhance the vintage look."

The design has also switched from large utility brick to the classic modular brick size. He said the brick would be reddish brown in color with a textured or distressed surface.Â Accent brick would be off white and smooth.

He said the developer plans to use manufactured stone trim, an "off-white calcium silicate product; not concrete."

He said that natural limestone would not be satisfactory. "The limestone coming out of Indiana now is very dark and inconsistent," Mr. Haylock said, "This will look better."

The developer's traffic engineer estimated that about 25 percent of the building's residents would use public transportation, that the project would generate about 20 to 25 trips an hour at peak times, and that there would be no decrease in the handling of traffic on adjacent streets because the development is replacing an auto dealership that generates considerably more traffic.

He added that the city's plan to upgrade traffic signals on Chicago Avenue so that they will have coordinated cycles should improve traffic in the area around the development.

Francis Lorenz, a real estate appraiser hired by the developer said he believes the project will have a positive impact on the value of surrounding properties because the use will be less intensive than that of the auto dealership it isÂ replacing. He noted that the new project will provide indoor parking which should alleviate some of the pressure on curbside parking in the neighborhood.

He said he'd studied areas along Central Street where five-story condo buildings back up to single family homes and said that the homes there showed similar price increases to those of homes elsewhere in Evanston.

The project proposed by developer Gregory Greif calls for 65 condo units,Â 3,650 square feet of retail space and 91 off-street parking spacesÂ in a building 67 feet tall, the height limit for the C1a commercial mixed-use zoning district in which it is located.

Other stories about 1001 Chicago Ave.