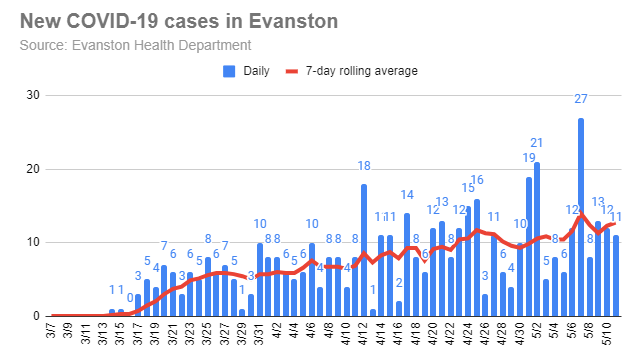 Evanston’s reported death toll remained at 15 while Chicago reported 39 additional deaths and there were a total of 53 more deaths across the state.

The Illinois Department of Public Health reported somewhat different data for Evanston than the city’s health department, saying there were five new positive tests today from a total of 65 tests conducted. That amounts to a positive result rate of 7.7%.

For the pandemic so far the state reports 476 positive cases in Evanston of 2,951 patients tested, for a positive test rate of 16.1%

The number of tests reported today in Illinois 12,421, was the lowest in more than two weeks. Statewide, the positive test rate today was 10.2%, the lowest since late March.

At his news conference today, Gov. J.B. Pritzker said that Northeast Illinois is still above the less-than-20% 14-day positive test rate required to move to the next stage of reopening the state on May 29, but he said there is still time for it to reach that goal. The three other regions of the state are already below the specified threshold.

The governor met reporters over an electronic conferencing system this afternoon after announcing that one of his staff members had tested positive for COVID-19 over the weekend.

That sent him and the remainder of his staff at the Thompson Center to self-isolate and work from home for the next couple of weeks.

Pritzker said he received a negative result on his latest COVID-19 test today.