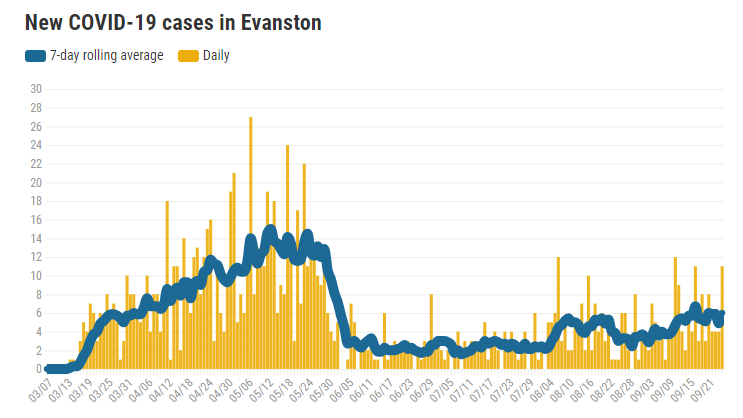 The Illinois Department of Public Health reported results of 69,793 tests, up substantially from yesterday’s 62,071.

The IDPH reported tests of 587 Evanston residents today, the highest number since last Saturday, and it found seven positive cases for a positive rate of 1.2% compared to a seven-day average rate for the city of 1.7%. The state now says Evanston has had a total of 1,112 cases.

By the city’s count, Evanston has a total of 1,120 COVID-19 cases. The city’s death toll from the disease remained unchanged today at 73.

Chicago reported 362 new cases today for a total of 78,707. Its coronavirus death toll remained unchanged at 2,944.

Those who died in Cook County today ranged in age from a man in his 60s to a woman who was over 100 years old.

In its weekly update of counties at a warning level for coronavirus, the IDPH today said 17 counties are now on the list, down from 24 a week ago. None of those counties are in the Chicago metro area.

As of last night, 1,637 people in Illinois were reported to be in the hospital with COVID-19. Of those, 371 patients were in the ICU and 124 of those were on ventilators.