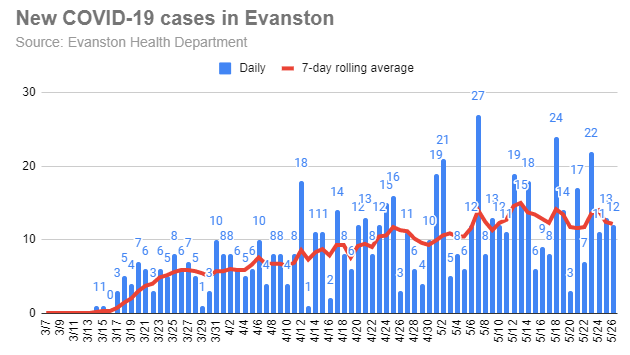 Evanston reported 12 new COVID-19 cases today as Gov. J.B. Pritzker declared that the state appears to have “come off the peak” of the coronavirus pandemic.

The total number of COVID-19 cases in Evanston now stands at 678. The death toll reported by the city health department remained unchanged today at 30.

State Health Director Dr. Ngozi Ezike cautioned that the numbers of new test results reported today were lower than usual because of the holiday weekend that had some labs closed. The state reported 17,230 new tests, the lowest number in more than two weeks.

The IDPH reported results of tests on 71 additional Evanston residents today, of whom 10 tested positive, for a positive reate of 14%. Seven of the 10 positive results came from south Evanston, the 60202 ZIP Code, although only 32 of the tests were conducted there. The state test numbers tend not to exactly match those reported by the city.

At his news conference this afternoon Pritzker said he plans to continue the ban on evictions that had been scheduled to expire at the end of the week.

He said he was “terribly dismayed” to see many people, apparently from Illinois, visiting nearby states that are not maintaining social distancing rules.

Those people, he said, “apparently haven’t been reading the newspaper and don’t understand how dangerous this pandemic is.”

“Just because the numbers are moving in the right direction now in Illinois doesn’t ean the virus has gone away. he reason we’re doing so much better is because people are wearing face coverings” and taking other social distancing measures to stay safe.