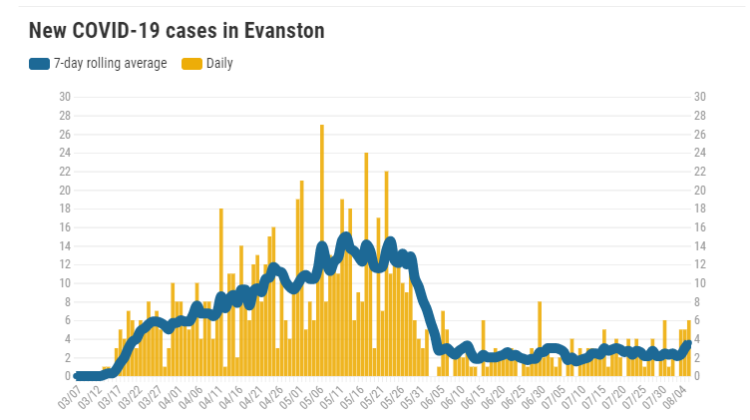 Evanston’s case count now stands at 898 although its death toll has remained unchanged for weeks at 71.

The Illinois Department of Public Health reported that 13 counties, most in central or southern Illinois, are now considered to be at a warning level for the disease. Grundy, Iroquois and Winnebago counties are the closest to Evanston on the list.

The state considered a county to be at a warning level if two or more of eight indicators show increased COVID-19 activity.

Gov. J.B. Pritzker today said this is a “make or break moment for the state of Illinois” as he announced new penalties for businesses that don’t require employees and customers to wear masks.

Deaths in Cook County today ranged from a man in his 30s to two women in their 90s.

The IDPH reported results of 46,868 COVID-19 tests today with a positive rate for the day of 4.7% compared to the seven-day average of 4%

The state reported test results for 211 Evanston residents today and said it found 10 positive cases for a positive rate of 4.7%.