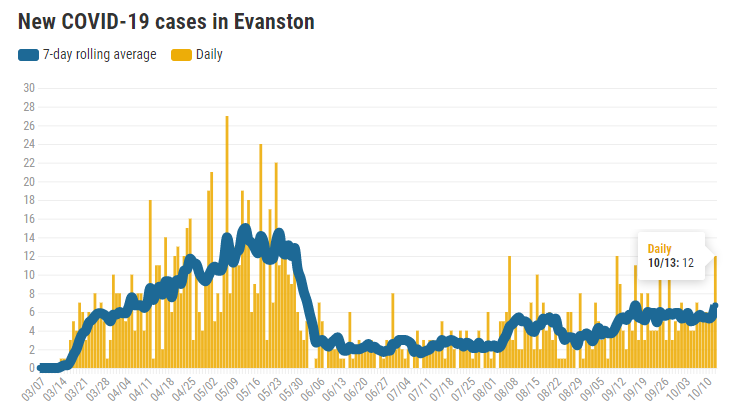 The seven-day average case count today is 2.819 — a level higher than it reached last spring.

But with many more tests being conducted than last spring the statewide positive rate in Illinois today was 5.1%, and the seven-day average is 4.5%. Seven-day positive rates for the state had topped 25% last spring but then fell to just over 2% for parts of the summer.

Chicago public health officials added Indiana, North Carolina, Rhode Island and New Mexico to its quarantine list today. That means people returning from those states to Chicago are expected to stay home for 14 days after arriving in Chicago.

However, people who regularly cross the Illinois/Indiana border for work or school are exempt from the quarantine order.

The Illinois Department of Public Health reported results of 55,993 tests today, up from Monday’s 47,579.

The IDPH reported tests of 334 Evanston residents today. It found 12 positive cases today for a positive rate of 3.6%, compared to the seven-day average of 1.5%. A week ago, the seven-day rate for Evanston was also 1.5%.

The state now says Evanston has had a total of 1,220 cases.

By the city’s count, Evanston has a total of 1,224 COVID-19 cases. The city’s death toll from the disease remained unchanged today at 73.

The latest seven-day average positive rate for some other communities:

Chicago reported 487 new cases today for a total of 85,640. Its coronavirus death toll increased by four today to 2,995.

Those who died in Cook County today included a woman in her 40s, a woman and four men in their 60s, two women in their 70s, and two women and a man in their 80s.

As of last night, 1,848 people in Illinois were reported to be in the hospital with COVID-19. Of those, 406 patients were in the ICU and 160 of those were on ventilators.