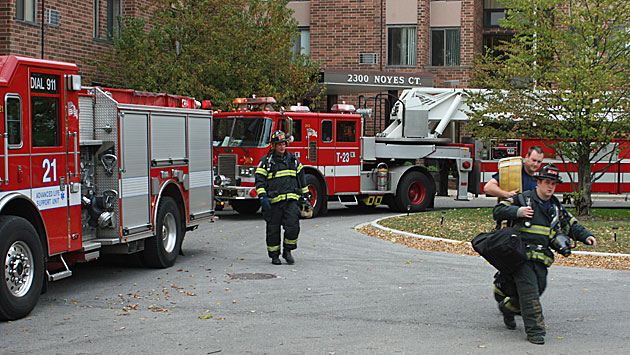 ComEd says more than 1,200 customers are affected by a power failure centered around Simpson Street and Green Bay Road in Evanston.

In an incident that may have been related, shortly after the power failure  struck, some residents of the apartment building at 2300 Noyes Court reported an odor of smoke in the building.

That led to several fire units responding to the scene. Some residents evacuated the building and one woman reported difficulty breathing and she was later transported to the hospital. But no fire was found in the building and the fire engines soon pulled away from the scene.

The power failure knocked out traffic lights at several intersections along Green Bay Road and Ridge Avenue, as well as some lights on Maple Avenue in downown Evanston.

Power was being restored to at least some of those signals by about 5:30 p.m.

The power outage, which struck just as rush hour was starting appeared to be a contributing factor in some traffic accidents.

The cause of the power outage was under investigation, but at least one resident on the 1900 block of Darrow Avenue reported hearing what sounded like an explosion coming from the ComEd substation in the 1600 block of Emerson Street

ComEd says it hopes to have power restored to the affected areas by 6:30 p.m.