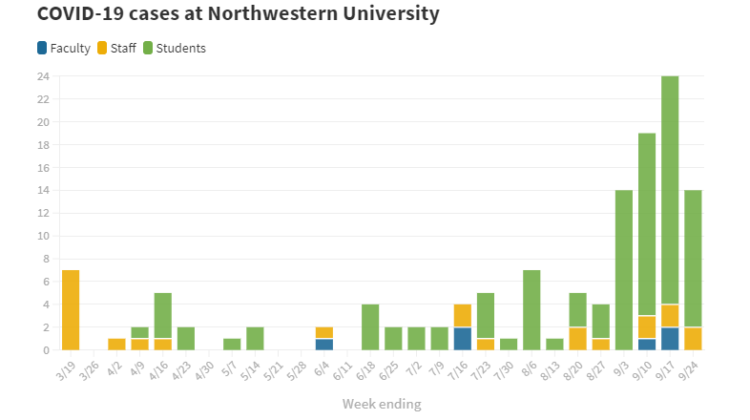 That’s down from 24 cases reported the previous week.

The school school says that over the seven day period ending Wednesday that it conducted 3,130 tests for the disease and found 20 new positive cases for a positive rate of 0.64%.

The University of Illinois Urbana Champaign, which has about two-and-a-half times as many students as Northwestern, reported conducting 58,057 tests in the seven days ending Wednesday — over 18 times more tests than Northwestern.

It reported 201 new cases — 14 times more than Northwestern — and a positive test rate of 0.35% — about half that of Northwestern.

Northern Illinois University in DeKalb, with an enrollment slightly smaller than Northwestern, reported 83 new cases in the the seven days ending today. It is conducting relatively few tests, just 638 in the week ending Sept. 20 and identified 17 cases through those tests, for a positive rate of 2.7%.

Illinois State University in Normal, with an enrollment about the same size as Northwestern, reported its testing this week found 24 positives in 1010 tests, which indicates a positive test rate of 2.4%