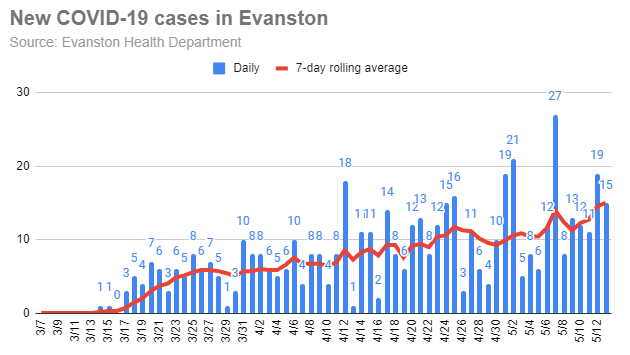 The state reported a new record high count of deaths today, 191, raising the state’s total to 3,792. Of those deaths there were 52 in Chicago, for a total of 1,493 and there was one additional death in Evanston, for a total of 17.

For the Northeast Region of the state the IDPH says the positivity rate is now 20.7% down by 2.5% over the last 14 days, but still over the 20.0% threshold for moving to the less restrictive Phase 3 of the governor’s Restore Illilnois plan

The sate reported results of 17,668 tests for the novel coronavirus today, down substantially from yesterday’s tally but the fourth highest daily total so far.

During his news conference this afternoon, Gov. J.B. Pritzker said businesses and state-licensed professionals who reopen in defiance of the closure orders would face loss of their licenses and that local governments that reopened could be denied reimbursement for costs incurred battling the pandemic.

He praised the decision announced today by legislative leaders to return to Springfield for a three-day legislative session next week and said adopting a new budget would be the most important item on their agenda.