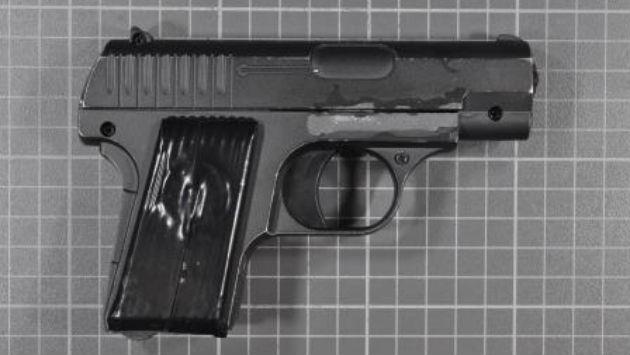 Evanston police say a school resource officer driving in the 1000 block of Elmwood Avenue about 3:45 p.m. Tuesday noticed a 13-year-old youth from Evanston who appeared to be upset.

In speaking with the youth, Police Cmdr. Joseph Dugan says, the officer learned the youth had been walking on the sidewalk when a male subject came up behind him, brandished a handgun and demanded the JBL speaker that he had attached to the side of his book bag.

The victim described the suspect as wearing a black jacket with a red hooded sweatshirt, Dugan says. Detectives searching the area observed a male juvenile matching the description of the suspect walking in the 1400 block of Oak Avenue.

When the detectives pulled over to speak with the juvenile, Dugan says, he fled on foot. Detectives began chasing the youth and observed him slip on some ice, fall to the ground and toss what appeared to be a black handgun under a parked vehicle.

The juvenile was taken into custody. The weapon turned out to be a BB gun that resembles a real handgun.

Dugan says the 15-year-old juvenile suspect from Chicago has been petitioned to juvenile court for felony aggravated robbery.