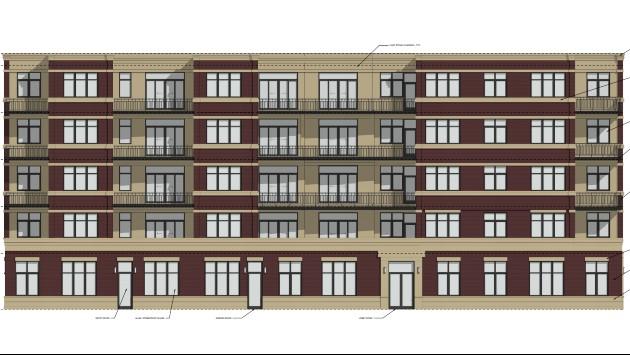 The Evanston Plan Commission voted 5-0 Wednesday night to recommend that the City Council approve plans for a five-story apartment building at 1555 Ridge Ave.

The approval came despite complaints from neighbors about the loss of parking now provided by the surface parking lot on the site and about the size of the planned building’s setback from the property to the north.

The Rev. Debra Bulloch, rector of St. Mark’s Episcopal Church, located across Grove Avenue from the building site, said she was also concerned about the expected loss, during construction, of seven on-street parking spaces on Grove, which she said are relied upon by her parishoners.

Several residents of the condominium building at 1567 Ridge Ave. complained about the developer’s request to provide just a three-foot setback from the lot line separating the construction site from their property.

That’s a substantial reduction from the 15-foot setback called for under the city’s planned development rules.

Commissioner George Halik said he had initially been bothered by the narrow setback. But he said that after he learned that the underlying R6 zoning for the site only calls for a three-foot setback, he concluded that the condo owners should have assumed that something might eventually be built that close to their property line.

A narrower building that only occupied a portion of the 1555 Ridge site and was too small to trigger the city’s planned development rules could be built as of right with the three-foot setback.

Commissioner Brian Johnson praised a recent change in the developer’s plan for that three-foot setback — that will see it planted with arborvitaes rather that be paved as a concrete walkway.

Some neighbors had complained about the amount of parking in the building — 57 spaces for 68 apartment units.

Developer Thomas Meador said he’d be willing to remove a ground floor apartment added at the assistance of city staff to boost the parking space count, but Johnson said he liked having the ground floor unit — that it helped activate the street.

Commissioner Jane Sloss said she wanted the developer to continue to work with city staff on improving the building’s appearance. “It appears a little heavy now,” Sloss said, and “further study would be good.”