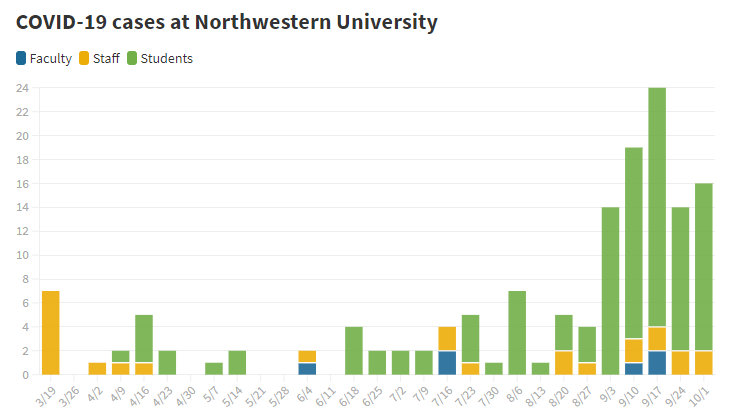 That’s up from 14 cases reported the previous week.

The school school says that over the seven day period ending Wednesday that it conducted 4,220 tests for the disease and found 15 new positive cases for a positive rate of 0.36%.

The University of Illinois Urbana Champaign, which has about two-and-a-half times as many students as Northwestern, reported conducting 60,203 tests in the seven days ending Wednesday — over 14 times more tests than Northwestern.

Northern Illinois University in DeKalb, with an enrollment slightly smaller than Northwestern, reported 34 new cases in the the seven days ending today. In the week ending Sept. 27 it reported conducting just 648 tests and identified 33 cases through those tests, for a positive rate of 5%.

Illinois State University in Normal, with an enrollment about the same size as Northwestern, reported its testing this week found 15 positives in 953 tests, which indicates a positive test rate of 1.6%

Evanston’s director of health and human services, Ike Ogbo, says the city does not plan to provide breakouts of how many city residents stricken with the disease are associated with the university or any other employer or facility because of federal health regulations. “Residents’ privacy is paramount,” Ogbo said during a COVID-19 video interview with Mayor Steve Hagerty this noon.

The university’s chief risk officer, Luke Figora, said that only about 700 students are in residence halls now. Nearly all the 4,000 first and second year students are studying from home, and most third and fourth year students live off campus.