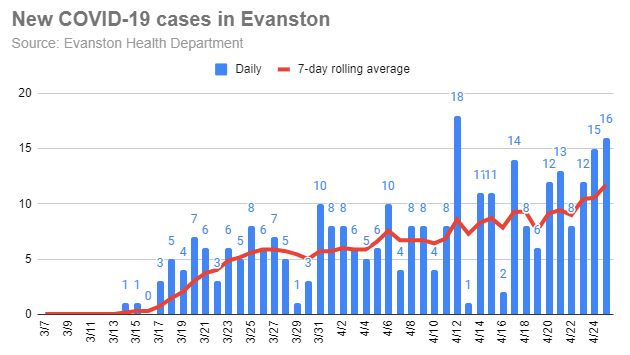 Evanston reported 16 new COVID-19 cases today, raising its total number of cases to 304. And, for the second day in a row, it reported one additional death, raising the death toll here from the pandemic to 10.

Statewide 2,119 new cases were reported, for a total of 41,777. Seventy-nine more people died across the state bringing that toll to 708.

Of the new cases statewide, 997 were reported in Chicago, raising that city’s total to 17,109.

This was the second day in which the state exceeded Gov. J.B. Pritzker’s long-time goal of testing more than 10,000 people a day for the coronavirus.

At the governor’s daily news conference, Dr. Ngozi Ezike, the state public health director, said there’s been an increase in calls to the state’s poison control hotline since President Trump earlier this week suggested ingesting household disinfectants as a potential treatment for COVID-19.

“Listen to scientists and health experts,” she urged residents.

She said that as of midnight last night 4,699 Illinois residents were hospitalized with COVID-19 symptoms with 1,244 in intensive care units and 763 on ventilators.