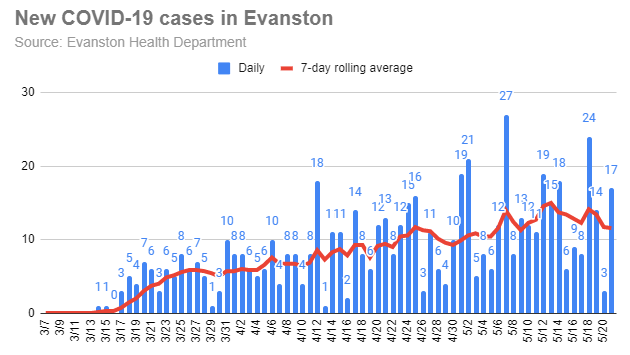 The Evanston Health Department reported 17 new COVID-19 cases among city residents today and one additional death. That brings the case count in the city to 613 and the death toll to 25.

The Illinois Department of Public Heatlh reported tests on 132 additional Evanston residents today with 14 positive results, a different number than that reported by the city, for a positive test rate of 8%.

Across the state there 29,307 tests were conducted — a higher number by a handful than on any previous day. The postiive test rate statewide today wat 7.7%

At his news conference in Springfield this afternoon, Gov. J.B. Pritzker said he’s still hopeful the state legislature will adopt a budget before its special session ends tomorrow and said he will support the compromise proposal to send all registered voters who have voted in recent elections vote-by-mail applications as a way to guard against coronavirus-induced low voter turnout in this November election.