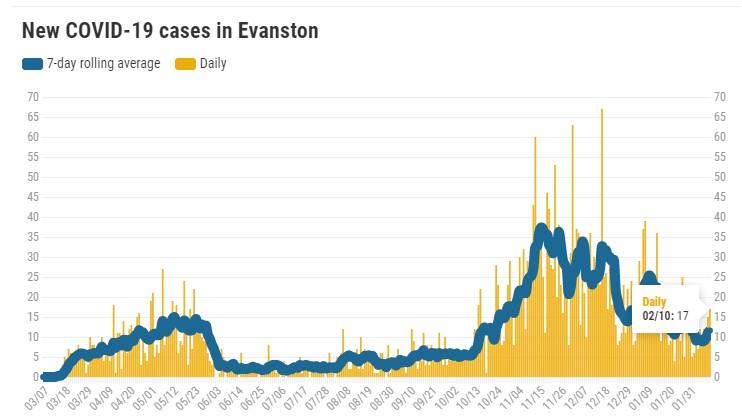 The Illinois Department of Public Health today reported that 62,923 people were vaccinated yesterday, compared to 58,189 the day before.

Gov. J.B. Pritzker today announced that the state plans to expand Phase 1B eligibility on Feb. 25 to include people who have comorbidities and underlying conditions as defined by the CDC. In addition, Illinois will also prioritize individuals with disabilities.

Pritzker said the Biden administration has increased the vaccine supply by nearly 30%, including a 5% increase this week.

A total of 1,480,078 vaccine doses had been administered as of yesterday, about 69% of the total 2,152,425 doses distributed to the state by the federal government. The IDPH says 2.57% of the state’s population is now fully vaccinated.

Nationwide, the Washington Post reports the 3.3% of the population has been fully vaccinated. It says Illinois now ranks 34th among the states in the percentageo population who’ve been vaccinated.

The IDPH reported tests of 408 Evanston residents today, compared to 194 yesterday. The IDPH found 12 positive cases here for a daily positive rate of 2.9%.

As of last night, 2,082 people in Illinois were reported to be in the hospital with COVID-19. Of those, 464 patients were in the ICU and 232 of those were on ventilators.