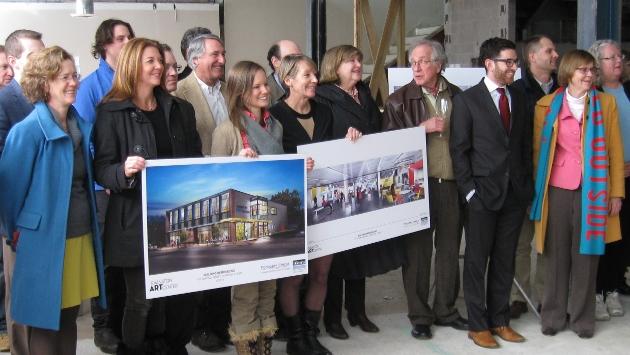 Embodying the theme, “where creativity meets community,” the Evanston Art Center Thursday showed off the site of its new home, at 1717 Central St.,  where it will move after spending nearly a half-century at the former Harley Clarke mansion at Lighthouse Beach.

On hand for the “groundbreaking” were Evanston Mayor Liz Tisdahl and aldermen Jane Grover (7th) and Mark Tendam (6th), as well as about 20 other persons representing the city’s arts supporters.

The center’s Executive Director, Norah Diedrich, told the assemblage that the community can expect an increased amount of free public arts programming after it occupies the 20,000-square-foot facility in June. 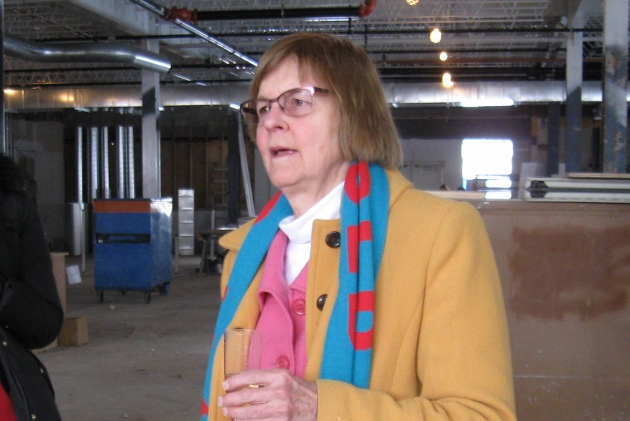 Mayor Tisdahl: “We’re better people because of the arts.”

The move from its lakefront mansion that the center was renting from the city for $1 a year, is being financed by a $2.5 million capital campaign that was launched last year under the theme, “See the Bigger Picture.”

So, far, the campaign has attracted donations in excess of $1.8 million, including a contribution of $500,000 to $750,000 from Col. Jennifer Pritzker, whose offer to purchase the center’s present home and convert it to a boutique hotel was rebuffed by the City Council last year.

After a potential deal to sell or lease the mansion to the State of Illinois fell through, the City Council  appointed a study committee to recommend  future action.

The new facility is expected to include programming and educational activities in the areas of culinary arts, design, digital fabrication, film, music, and a broad array of visual arts, in addition to expanded gallery spaces.

A coffee shop, dubbed the “Art Bar,” will also be part of the new space.

The Art Center was founded in Evanston in 1929 “to foster the appreciation and expression of the arts among diverse audiences.”