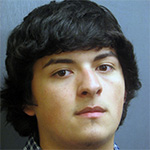 An 18-year-old Evanston man is facing a felony theft charge after he allegedly grabbed a cell phone from a man in James Park Monday evening.

Police say the 53-year-old victim was making a call while standing in the park in the 300 block of Dodge Avenue about 7 p.m. when the thief approached from behind him and snatched the phone from his hand.

Cmdr. Jay Parrott says the victim and several other people who saw the theft chased the offender on foot and notified police.

Parrott says officers responding to the area found the suspect hiding in a yard in the 1800 block of Kirk Street, and that the victim positively identified the suspect, Francisco Gonzalez, 18, of 1222 Harvard Terrace, as the man who robbed him.

Gonzalez is now scheduled to appear in Skokie district court at 9  a.m. on May 10.