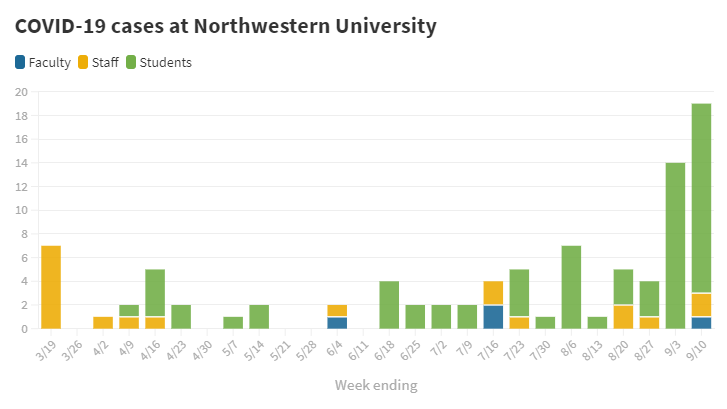 Colleges and universities around the country vary greatly in how they are reporting COVID-19 cases and how aggressively they are testing for the disease. And many schools have become hot spots for COVID-19.

But based on case counts compiled by the New York Times and mapping that data to student enrollment numbers for individual schools, it appears that Northwestern at this point has a positive case rate substantially below the average for Illinois schools.

Northwestern’s rate is about 0.35% while the average for all the Illinois schools is 1.15%.

Of course Northwestern starts fall classes later than most schools, so its comparative position may change in coming weeks. (The case rate calculations for all the schools count only student enrollment and not faculty or staff populations.)

Some schools, including the University of Illinois at Urbana-Champaign and Illinois State University, are conducting extensive testing campaigns and publicly disclosing the results on a daily basis.

Northwestern, while it has reported positive case counts since last March, farther back than many other schools, has not reported the number of tests performed along with the positive case numbers.

The school notes that its case count includes self-reported cases as well as ones that are the result of university-sponsored testing.