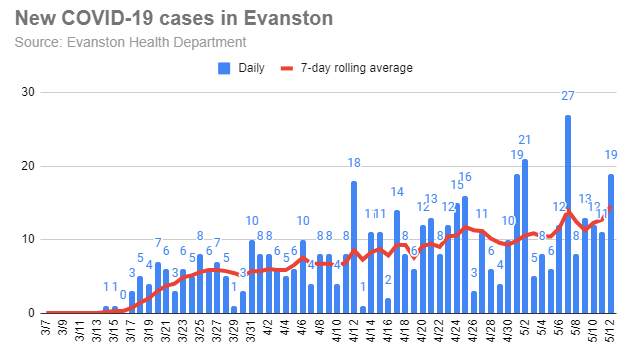 The Illinois Department of Public Health reported somewhat different data for Evanston than the city’s health department, saying there were 21 new positive tests today from a total of 80 tests conducted. That amounts to a positive result rate of 26.25%.

That’s a much higher positive rate than the 7.69% reported for Evanston by the IDPH from Monday’s tests..

For the pandemic so far the state reports 497 positive cases in Evanston from 3,031 patients tested, for a positive test rate of 16.4%

During the governor’s news conference this afternoon, Dr. Ngozi Ezike, the state health director said the increase in positive results is to be expected given the increase in testing.

However the results appear to counter the frequently stated assumption that increased testing would lead to a lower positive test result rate with the reservoir of undetected cases shrinking as testing expanded.

At the news conference Gov. J.B. Pritzker called on state lawmakers to return to Springfield to “begin to put our financial and economic house back in order.”

He urged them to provide relief for renters, homeowners and businesses harmed by the pandemic.