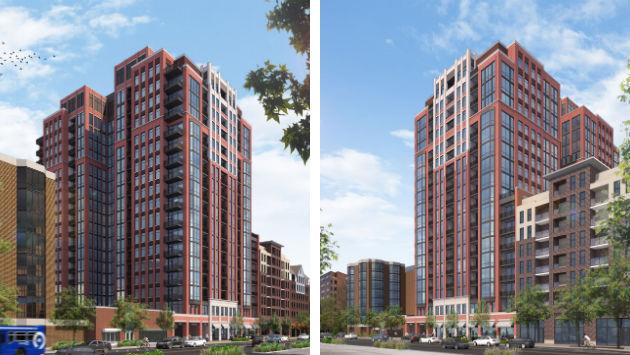 The owners of The Merion at Chicago Avenue and Davis Street in downtown Evanston have proposed a 19-story, 240-unit active adult residential development to replace a row of one-story retail shops at 1621-1631 Chicago Ave., just north of The Merion.

Some of those shops now are vacant, but the row also includes Amy Morton’s Found restaurant.

The proposed development, called The Legacy, includes about 3,500 square feet of retail space on the first floor and parking for 85 cars on two underground levels.

Last May the developers requested a zoning analysis from the city for a shorter but otherwise largely similar development on the site that would have been 13 stories tall and have had 156 dwelling units with the same amount of parking.

The city staff response to that proposal criticized having the parking entrance off the street, rather than the alley, saying it would create conflict points for vehicles, pedestrians and bicycles on the Chicago Avenue protected bike lane.

A drawing showing how the planned building would compare in height to its neighbors.

They say the project will “fulfill the continuing strong demand for downtown Evanston luxury rental residential living rich with amenities that both empty nesters and younger populations are seeking.”

The planned development proposal is currently under review by city staff. A date for its initial review by the city’s Design and Project Review Committee has yet to be set.

The proposed development schedule assumes that if the project is approved by the City Council by this June, construction would be completed by September 2021.