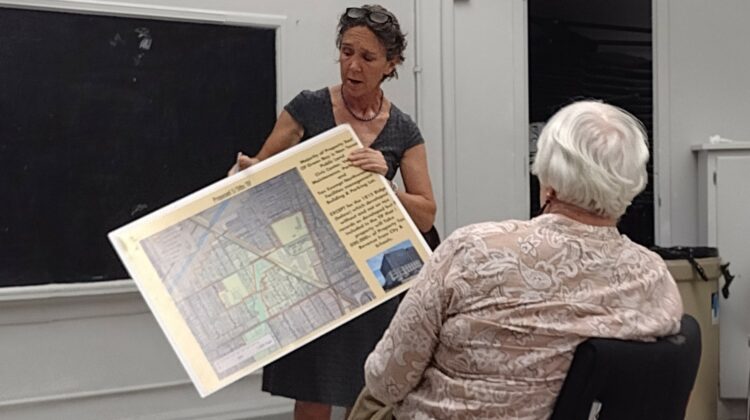 Ald. Clare Kelly (1st) shows a map of the proposed Five Fifths TIF district to residents at her ward meeting.

Ald. Clare Kelly (1st) asked residents for their opinions on a plan to eliminate the city ordinance that says no more than three unrelated people can live in a dwelling unit.

A resident said the rule was intended to keep Northwestern University students from crowding into rental properties, which can create issues with noise and safety, but asked why the rule was necessary when building code enforcement could just as easily address those problems.

Kelly said noisiness was “frequently, much of it, the result of overoccupancy,” and claimed that doing away with the three-unrelated rule might lead landlords to create clusters of group homes in lower-income communities, an issue raised by an attorney at Wednesday night’s Plan Commission meeting .

Another resident questioned whether the police could adequately respond to calls about noise disturbances and enforce codes at a time when the Evanston Police Department is being downsized. Last year, budget constraints caused the city to reduce the size of its police force.

“I don’t think we resolve issues by calling somebody with a gun,” another person replied. “We don’t get an intermediary to do our dirty work is my belief.”

But others doubted whether they had any options besides calling the police if they had to deal with disruptive student behavior.

Kelly said she hoped community meetings, ordinance enforcement and properly revised codes and ordinances would “make an impact” on residents’ unease about students living in the 1st Ward.

Further debate took place over the details of a possible Alternative Emergency Response program. If approved, the pilot program would enable professionals such as social workers to respond to emergency situations instead of police.

A skeptic of the program asked who would be liable if alternative emergency professionals responded to a situation that went “awry.”

This prompted a supporter of the plan to ask, “Where does the liability lie now?”

A worried Sherman Plaza resident said her neighbors are careful about when they leave their building to avoid potentially unsafe interactions with nearby homeless residents. She said, “So some real issues, and I don’t know what to do about it.”

“I think we need to work on a comprehensive plan for homelessness in Evanston,” Kelly said, “so that nobody needs to suffer on either end.”