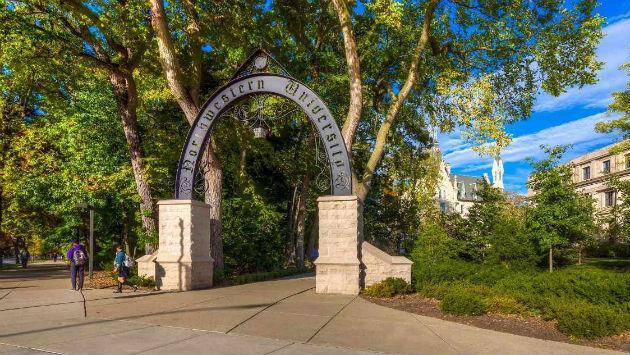 A pair of Burmese journalists from the Reuters news organization will be honored in Evanston on Oct. 26 as recipients of the 2017 James Foley Medill Medal of Courage in Journalism.

The winners, Wa Lone and Kyaw Soe Oo, had been held by Myanmar officials since last December, pending a hearing on whether to bring charges against them under that country’s Official Secrets Act.

Then last month, a Myanmar judge found them guilty of breaching a law on state secrets and jailed them for seven years.

Reuters Myanmar Bureau Chief Antoni Slodkowski will accept the award on behalf of Wa Lone and Kyaw Soe Oo on Oct. 26. at 12 p.m. on the Evanston campus at the McCormick Foundation Center, 1870 Campus Drive. The event is open to the public.

The Foley Award has been given annually since 2003 to the individual or team of journalists working for a U.S.-based media outlet who best display moral, ethical or physical courage in the pursuit of a story or series of stories.

The contest is open to journalists from newspapers, television stations, online news operations, magazines, or radio stations. The story subjects may be local, national, or international in scope.

Before their arrest, Wa Lone and Kyaw Soe Oo were painstakingly reconstructing the killings of 10 Rohingya men last September, following their path from a beach in the Rakhine state, where government troops and Buddhist villagers plucked them from among a crowd of villagers seeking refuge, to their mass grave nearby.

The two reporters told each of the men’s stories, shining a light on their lives as well as on their deaths. “The coverage was riveting and horrifying,” said award co-judge and Medill Professor Donna Leff. “The reporting was meticulous and the story-telling was heroic,” she said.

The reporters led a Reuters team in Myanmar and Bangladesh who have chronicled the violence against this Muslim minority, the widespread burning and looting of Rohingya villages, and the rape and killings of Rohingya children, women and men.

The violence has resulted in 600,000 people fleeing their homes in what has been described by the United Nations as “a textbook example of ethnic cleansing.”

“What was also remarkable about this entry was that it not only demonstrates individual courage but also exemplifies institutional courage,” said Medill co-judge and Chicago Tribune investigative reporter David Jackson.

“If they had pulled their reporters, the world would never know this story. Instead, Reuters chose to double down on its coverage,” Jackson said.

Working in the Myanmar conflict zones and the refugee camps in Bangladesh, the team reported the army’s campaign against the Rohingya in northern Rakhine and provided an in-depth look at the early strategy and recruitment tactics of an insurgent Rohingya group whose attacks resulted in a violent military counter-offensive.

The reporting included a series of powerful interactive multimedia presentations that showed the full extent of the refugee problem and the conflict, including the widespread burning of Rohingya villages.

This year’s runner up also won high praise from the judges. “Death in Al Ghayil: Women and Children in Yemeni Village Recall Horror of Trump’s ‘Highly Successful’ SEAL Raid” by Iona Craig was published in The Intercept in March 2017.

In the article, Craig recounts her more than 1,000-mile undercover journey by road into al Qaeda and Islamic State active areas to reach the remote village on the frontlines of Yemen’s civil war where the raid took place.

“This year’s winners and runner-up mark only the second time we have awarded the prize to non-U.S. journalists, and it’s important to recognize the perils these international journalists face,” said co-judge and Medill Board of Advisers member Dick Stolley. “Craig’s investigation also set a new standard for the James Foley Medill Medal for Courage by recognizing an online-only submission as the runner up, expanding our vision for this award.”

The testimonies Craig collected from eye-witnesses and survivors did not match the version of events put out by American officials and U.S. Central Command. The day the story was published by The Intercept, U.S. Central Command head Gen. Joseph Votel told the Senate Armed Services Committee that no bad decisions had been made and no further investigations into the January mission were necessary.

Commenting on the quality of the submissions, Leff said, “We stand in deep admiration for the journalism in all the medal entries. At a time when our profession is under financial and political siege, we are gratified by the fearless reporters in all corners of the world telling painful stories we need to hear.”