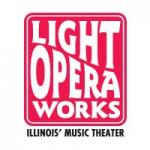 As the Chicago area emerged from another polar vortex this week, Light Opera Works is thinking warmer temps with the release of its 2014 summer musical theater workshop schedule.

There will be five sessions available to youth, ages eight to 13. Each week-long session is geared to help kids learn the skills of musical theater, including acting, dancing and singing. The culmination is a mini-musical performance for family and friends on Saturday afternoon. No auditions are required and every child gets a part.

New this year is a teen production of Fiddler on the Roof, geared to youth, ages 13 to 18, who will rehearse a shortened adaptation of the Broadway classic. The final performance will include costumes, sound and lights on a professional set at Cahn Auditorium (home of the Light Opera Works adult production of Fiddler in August, 2014).

Fiddler on the Roof, youth production