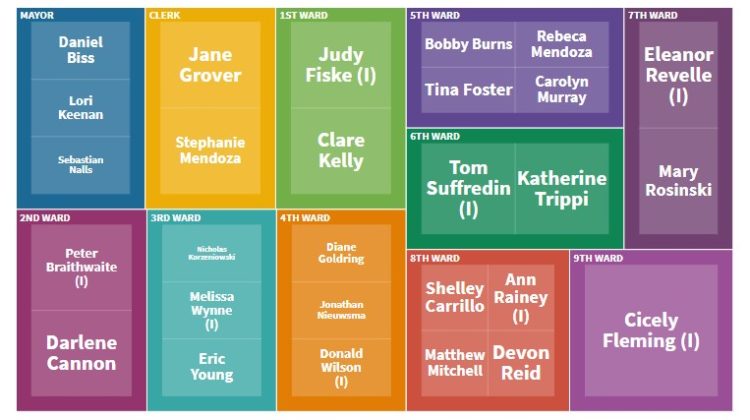 Twenty-eight candidates have filed nominating papers to run for 11 Evanston municipal offices in next year’s election.

With three candidates running for mayor, a primary election will be held for that office on Feb. 23, because a local referendum approved in 1992 requires a mayoral primary when there are more than two candidates. That referendum addressed only the mayor’s race.

Other media have quoted City Clerk Devon Reid as saying there will also be a primary in the 5th Ward, where four candidates are running.

But that statement appears to be at variance with state law. The Illinois Municipal Code, 65 ILCS 5/3.1-20-45, calls for skipping a primary in a nonpartisan municipal election “when not more than 4 persons” are running.

Four candidates also appear to be seeking office in the 8th Ward.

But one, Shelley Carrillo, failed to specify in her nominating papers which aldermanic seat she is seeking. Carrillo lives in the 8th Ward and circulated her petitions among 8th Ward residents, but the failure to specify the ward on the nominating papers could lead to a challenge over whether her name should be placed on the ballot.

Nov. 30 is the last day to file objections to a candidate’s nominating papers.

The candidates for mayor are:

The candidates for city clerk are: