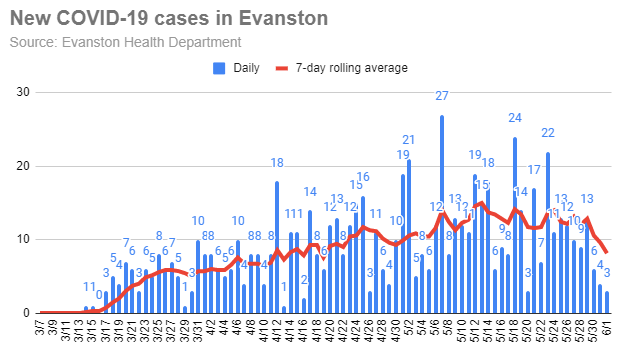 The total of COVID-19 cases in the city now stands at 723. The Evanston Health Department’s reported death toll from the disease remained at 41 for the fourth day.

The Illinois Department of Public Health reported conducting 88 additional tests in Evanston that returned a 4.3% positive rate. There was little difference in the test results between north and south Evanston ZIP Codes today.

Across Illinois a total of 20,014 additional tests were reported today. That’s the lowest total number of tests in five days.

Test results may drop further later this week because the state was forced to close several drive-thru test sites today because National Guard troops working there have been reassigned to assist local law enforcement agencies in dealing with civil unrest in several cities across the state.