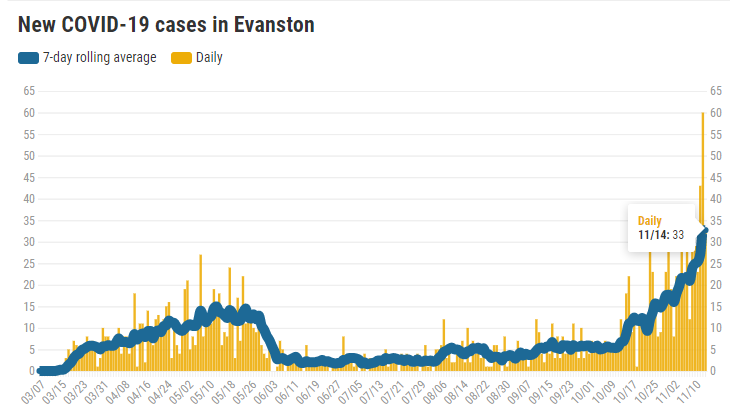 It was the third highest one day statewide death toll of the pandemic, but officials had warned on Friday that today’s toll would be unusually high because of delays in reporting some deaths that occurred the previous day.

“More Illinoisans are in the hospital battling COVID-19 now than we saw at our highest average in the spring – and increasingly, we have regions at risk for potential ICU bed shortages and staffing shortages as our case rates continue to rise,” the governor added.

Seven-day positive rates in many areas, though, were down at least slightly from peaks reached on Thursday and Friday.

The IDPH reported tests of 1,932 Evanston residents today. It found 28 positive cases for a daily positive rate of 1.5% The seven-day positive rate here is now 2.8%

The state now says Evanston has had a total of 1,888 cases.

As of last night, 5,415 people in Illinois were reported to be in the hospital with COVID-19. Of those, 1,018 patients were in the ICU and 499 of those were on ventilators.