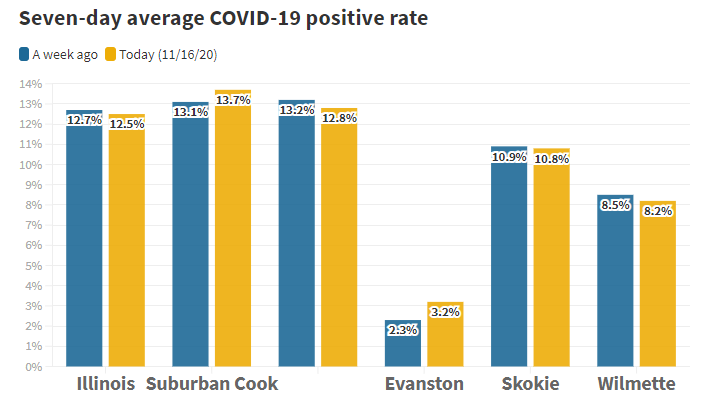 The seven-day positive test rate statewide was 12.5% today. That’s down slightly from 12.6% a week ago.

Gov. J.B. Pritzker today said he sees “some glimmer” of hope in slight declines today in some seven-day positive rates, but notes that there’s been a pattern of increasing rates on Tuesdays.

The IDPH reported tests of 564 Evanston residents today. It found 31 positive cases for a daily positive rate of 5.5%. The seven-day positive rate here is now 3.2%.

The state now says Evanston has had a total of 1,972 cases.

Evanston’s health department says the city now has had a total of 1,945 COVID-19 cases. The death toll from the pandemic in Evanston remained unchanged today at 81.

As of last night, 5,581 people in Illinois were reported to be in the hospital with COVID-19. Of those, 1,144 patients were in the ICU and 514 of those were on ventilators.