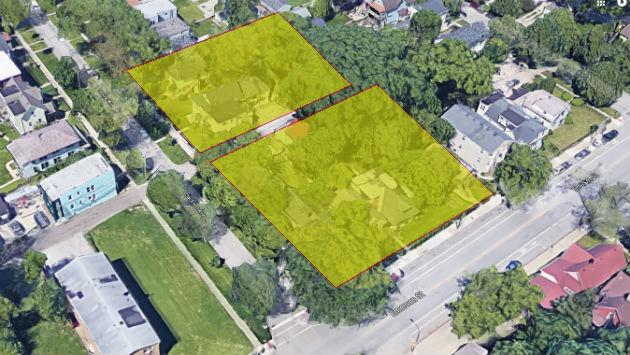 A developer has submitted preliminary plans to the city to build 44 condominium units in two five-story buildings on adjoining properties at Emerson Street and Jackson Avenue on Evanston’s near west side.

The proposal from Domanus Development calls for 24 units in a building facing Emerson Street. That building would have 25 underground and 11 surface parking spaces.

A rendering of the proposed building facing Emerson Street.

The building facing Jackson Avenue would have 20 units and 18 underground and 12 surface parking spaces.

A rendering of the proposed building facing Jackson Avenue.

The buildings are proposed to have all two-bedroom units ranging in size from 1,500 to 1,600 square feet.

The developer’s initial plans were reviewed by city staff and determined to be non-compliant with city zoning for an as-of-right development.

Planning and Zoning Administrator Scott Mangum says they would require several site development allowances including for interior side yard setbacks. building height and lot coverage. The project would need to be reviewed as a planned development under the city’s zoning code.

The project would require demolition of seven existing buildings with a total of 12 dwelling units. That’s a contrast to most recent large residential projects in the city which generally have been built on land that was either vacant or being used for commercial or industrial uses.

But county property records show that assembling the final pieces of the site proved profitable for those who sold to Lee Street.

Gnathan Carpenter, who bought the single family home at 1421 Emerson St. in 2014 through the city’s NSP II housing rehabilitation program for $227,000 received $525,000 when he sold it to Lee Street earlier this month.

Several years ago the 1900 block of Jackson was noted as a crime hotspot in the city, and while police claimed success in reducing crime on the block, it has continued to sporadically show up in police incident reports, including an unconfirmed sighting yesterday afternoon of a man with a gun.

Several of the properties that would be demolished under the plan are believed to provide relatively affordable housing in the community. It’s unclear at this point how the developer plans to comply with the city’s affordable housing ordinance.

Alderman Robin Rue Simmons, whose 5th Ward includes the development site, has not responded to an email seeking comment on the project, which is about a quarter mile west of the northwest edge of downtown.