Update 2:12 p.m.: City officials say ComEd this afternoon is reporting 4,500 customers in Evanston are still without power. That's down from 8,300 last night and this morning.

Northwestern University officials say all of the more than 60 campus buildings that lost power during the storm now have their electrical service restored.

Stoneback told aldermen at Monday night's City Council meeting that 8,291 customers didn't have power. He added that, at the peak of the problems after Monday morning's severe thunderstorm, 12,400 customers were out.

Stoneback said he didn't have exact figures for how many ComEd customers there are in Evanston, but he noted that the city's water department serves about 14,000 accounts.

There's not necessarily an exact correlation between the number of water and electricity customers, but Stoneback suggested the count should be fairly close — which suggests that more than half of Evanston is still without power this morning, 24 hours after the storm. 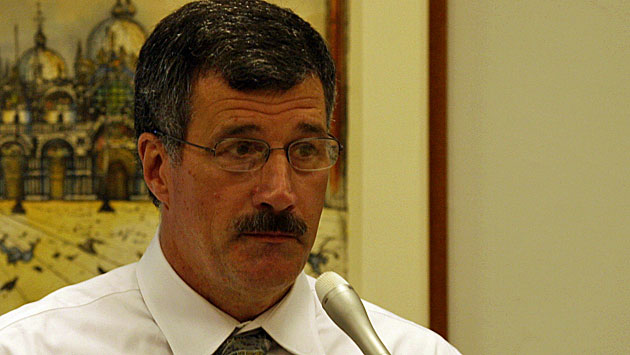 Top: Tree limbs fill the front yard of a home in the 1800 block of Asbury Avenue. Above: City Utilities Director Dave Stoneback speaking to the City Council Monday night about the storm-related power outages.

City officials provided a map showing the areas that are still reported to be without power this morning. The affected areas, shown in red on the map, are concentrated between Green Bay Road and Ridge Avenue north of Central Street, along the lakefront between Main and Dempster streets, and ranging across several blocks either side of Asbury Avenue from Church to Howard streets.

Across the metro area ComEd reports about 359,000 customers without power, down by more than half from the 868,000 reported in what the utility says is the worst storm in a decade.

The company says it expects restoration efforts to take several days and that it has 900 crews in the field today — including crews from outside contractors and from utility companies in three neighboring states.

Stoneback said the utility will focus on restoring circuits that serve a large number of customers first. And he said customers whose individual service lines are down, or have been pulled away from the wall of their homes, will need to hire their own electricians and have the work inspected by the city before ComEd will restore service. (Details here about how to handle that situation.)

Where to charge up your computer and cell phone?

If you're stil without power, you may have given up on saving the food in the freezer, but what to do about staying connected?

Alderman Ann Rainey, 8th Ward, said she plans to be at the Police Outpost, 633 Howard St., starting at noon today, opening the building to let residents recharge their computers and cell phones.

Other people have suggested stopping by the main library downtown at 1703 Orrington Ave.

This reporter — who was without power for 12 hours yesterday — found Perla Cafe at 1813 Dempster St. to be a good spot. Lots of power outlets all around the room, more than enough for the number of customers present.

Power up, and stay cool

Update 11:35 a.m.: City Manager Wally Bobkiewicz says several air-conditioned city facilities are available during their usual business hours for people without power to cool off on what's expected to be a warm day today.

Some also have public Wi-Fi connections available as well as power outlets for recharging devices. Here's a list:

City officials say city crews will soon begin picking up fallen branches. Residents are asked to place all branches in the parkway. Because there's been so much damage, it's expected to take city crews about a week to pick all the tree debris.