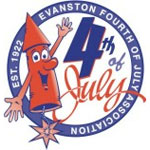 The Evanston 4th of July Association and the City of Evanston will hold a community meeting to gather public input on Independence Day activity ideas at 7 p.m. tonight at the Fleetwood-Jourdain Community Center, 1655 Foster St.

Organizers are looking for community input on potential new activity sites, new site partners for the association, possible transportation improvements to and from the parade and general thoughts on Independence Day activities.

In commemoration of Evanston’s 150th anniversary, association leaders hope to have Independence Day events in every Evanston ward.  Events are already planned in several wards and meeting organizers believe there are plenty of communitywide resources, experience and support available to help create more ideas for activities in other areas of the community.

In 1921, after a child was injured setting off fireworks, the North End Mother's Club formed the North Evanston 4th of July Association to provide a full day of safe, supervised and constructive activities for children each year.

In 1980, the association changed its name to the "Evanston Fourth of July Association," expanding its scope to include all of Evanston.

Unlike most Independence Day celebrations in other communities, the festivities in Evanston are produced entirely by the all-volunteer, privately donor-funded Evanston 4th of July Association.

No tax dollars are normally used for the actual production of sporting activities, the parade, the twilight band concert or the fireworks presentation.

However, with the City of Evanston’s sesquicentennial this year, the City Council voted to allocate $10,000 for extra performers for the parade, thereby allowing the Association to dedicate more private funds to other areas of the celebration.