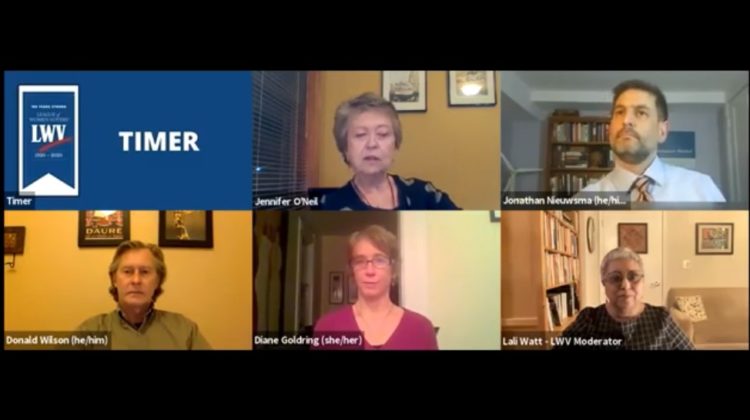 The cost and function of the Robert Crown Center was one of the pointed disagreements in a generally polite and respectful Wednesday night forum for 4th Ward aldermanic candidates.

Incumbent Don Wilson and challengers Diane Goldring and Jonathan Nieuwsma answered questions in the event which was sponsored by the League of Women Voters and the Evanston Public Library.

The three contenders agreed on things like redirecting some police funding to social service 911 response, additional commitment to fighting climate change, and the need for more affordable housing.

Because Wilson has represented the 4th Ward for three terms, Goldring and Niewsma aimed their disagreement with certain city actions at him. Goldring said the Crown Center, with its two ice rinks, is “one of the most inequitable” projects in town, and Nieuwsma criticized Crown that way as well.

Wilson responded that he “couldn’t disagree more.” Before Crown was built, Wilson said, most activities were concentrated in parts of Evanston which have the most resources. Crown, he added, has gotten programs such as day care into a more central location.

While no one argued for cutting city services, Niuesma said money could be more efficiently spent through proper use of experts, so Evanston would not end up, as he put it, “spending $8.2 million on fruitless litigation” over James Park.

There was cordial disagreement over how and when an alderman should meet with the public in their ward. Goldring and Nieusma said they would have regularly scheduled meetings, but Wilson said he prefers meetings tied to specific issues, because regular sessions often draw only a handful of people.

While it seems every candidate in Evanston agrees the city needs more affordable housing, there were different strategies mentioned in how to head in that direction.

Goldring, for example, said “we need to get tougher on developers.” She said Wilson described a pending five story project on Main Street as not intended for families, and asked “why?”

Wilson replied that “a five-story building next to the railroad tracks,” is not ideal for families, and that more housing is needed in neighborhoods. Wilson also said that while getting tough with developers may sound attractive, forcing developers to put more low cost units into a building simply drives up the cost for other renters who have to cover the overall tab.

Nieuwsma praised a recent City of Chicago measure which bans “de-conversion” of two-and-three flat units into single family dwellings in a couple of neighborhoods as a potential idea for Evanston.

Wilson is an attorney, Goldring works for a small internet company, and Nieuwsma is an engineer. All have been active in a variety of civic and social service organizations. The two write-in candidates in the 4th Ward, Sari Kadison-Shapiro and Patricia Connolly, did not take part in the forum.

Early voting for the Feb. 23 primary begins on Monday. The two top finishers square off for the 4th Ward position in the general election on April 6.