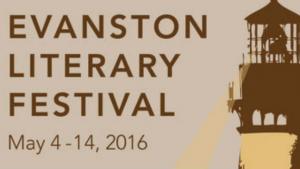 More than 50 free events, including author talks, readings by novelists, poets, historians, and essayists, storytelling events, panel discussions on writing and publishing, storytimes for children, and a new play performance are featured in an upcoming Evanston Literary Festival, May 4-14.

On Mother's Day, an afternoon of readings by ten different writers will celebrate mothers and motherhood.

The Festival begins on May 4, with an appearance by the Chicago Tribune’s Pulitzer Prize-winning architecture critic Blair Kamin at Bookends & Beginnings. Architecture will also be the focus of a presentation on May 10 by Design Evanston about their book on Evanston architecture at the Evanston History Center, and Richard Cahan will be discussing his book about preservationist Richard Nickel on May 12 at Perspective Gallery.

A centerpiece of the event is Northwestern University’s Spring Writers’ Festival, which every year brings prestigious writers to Evanston. This year, their writers featured from May 10-12 include science/nature writer Sharman Apt Russell, award-winning poet Laura Kasischke, and acclaimed novelist Alexander Chee.

Free comic book day on May 7 will include free comics at Comix Revolution and all three locations of the Evanston Public Library, and a panel discussion about comics memoir and comics journalism at the Main Library.

Storytelling is a major feature of the festival, including the Do Not Submit open mic and Storytelling in the Snug on May 8 at the Celtic Knot, and the Shoes of Your Choice performance art event with the Block Museum of Art on May 10 and 11.

Children’s events at the festival include storytelling sessions at the Evanston Public Library and Bookends & Beginnings, plus a special WTTW Kids Readers Are Leaders performance featuring Miss Lori’s CAMPUS on May 6 at Aldi.

Sidetracked Studio will host a reading by RHINO Poetry on May 7, followed by an opening reception for the festival, so local writers and readers can meet and mingle. A closing reception will be held on May 13 at Creative Coworking, following a panel of writers who launched a second career as novelists.

The Evanston Literary Festival also includes a panel on great Chicago writers (cosponsored with the Chicago Literary Hall of Fame), a roundtable with some of Chicago’s leading publishers on the future of book publishing, and the first events for new books by Evanston writer Zoe Zolbrod (The Telling) and Who Do You Serve, Who Do You Protect?, an essay collection about police brutality from Chicago publisher Haymarket Books.

A full schedule for the festival can be found online.