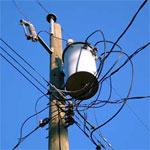 About 500 ComEd customers in Evanston are reported to be without electric service this morning, more than 15 hours after a major thunderstorm rolled through the area Friday afternoon.

ComEd reports about 69,000 customers without power across the metro area and a spokesman says it may take more than a day to get all the power restored.

ComEd has crews working in Evanston, says Utilities Director Dave Stoneback. Most of the outages are due to tree branches pulling down the electric wires. Residents without power are encouraged to confirm with ComEd that the utility is aware of their outage.

The traffic signals at Ridge, Green Bay and Emerson remain out of service, and city officials say they will likely not be operational until next week. That may lead to additional congestion with this afternoon's Northwestern football game at Ryan Field.