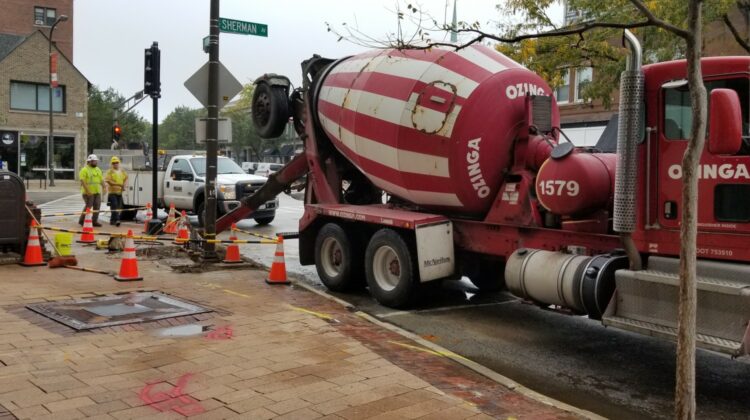 A construction crew pouring the concrete base for one of the new poles at the corner of Sherman Avenue and Grove Street Thursday afternoon.

The crews are replacing existing light poles with new, taller ones that have cell phone equipment attached near the top of the poles.

Evanston’s Public Works Agency director, Dave Stoneback, says the wireless carriers have submitted permit applications for about 60 of the new poles, mostly in the downtown area, in other business districts and along the Northwestern University campus.

He says that under state law authorizing the new wireless network the city has very little control over the installation of the small cell antennas and that he had no information about how extensive the coverage will be or when it may be available to customers.

Evanston Now has contacted cell phone carriers Verizon, T-Mobile and AT&T, and we’ll provide an update if we hear back from them about when the new service will be available.

5G wireless networks are slowly being rolled out to replace the current widespread 4G system and are expected to offer greater speed, reduced latency and increased bandwidth.