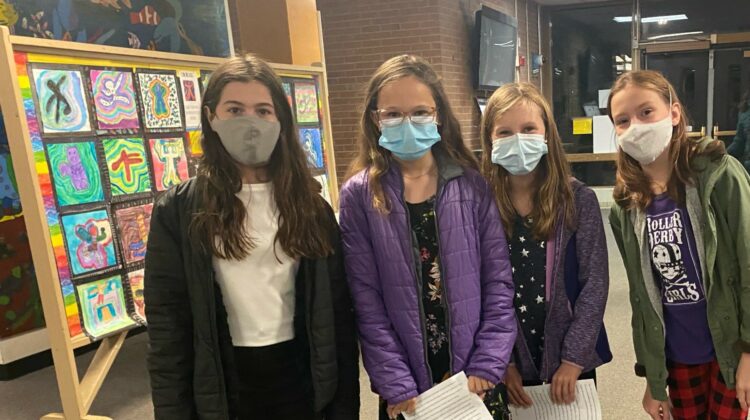 With that proclamation, 10-year old Zoe Price became a lobbyist on Monday night, along with four of her classmates.

No, not the kind of lobbyist who makes big bucks, wears tailored suits, and drives an expensive car.

Rather, these 5th graders at King Arts School in Evanston/Skokie School District 65 lobbied for something that’s become important to them … opening a neighborhood school in the 5th Ward.

Each of the children at the joint District 65/202 board meeting read from letters they had written, as part of a research project in Lauren Gentles’ class into racial segregation and redlining in Evanston.

Foster School, in that largely segregated ward, was nearly all Black by the Great Depression of the 1930s.

Having a neighborhood school in the ward, Annabel said, “made the community very strong. But when they closed Foster School, the community started tearing apart.”

Foster was closed in the late 1960s in the name of desegregation, and was turned into a magnet school for about a decade before the magnet program was relocated. That left the 5th Ward without a school, with the mostly-minority students transported to other schools around town.

“So they had to take a very long bus ride,” said Zoey Slater.

Zoey Price explained that so much time on the bus going home takes away time for after-school activities. “This is not fair,” she said.

It’s not that the other schools are bad, said Emma Delahaza.

“I’m sure those schools are wonderful,” she stated. “But it’s still unfair to 5th Ward kids.”

All good lobbyists have a solution to the problem they have identified. The 5th graders called for either buying back the old Foster School from the Family Focus social services agency and renovating the building back into a neighborhood school, or else building a completely new one in Ward 5.

As for how to cover the cost, the students suggested things such as bake sales, car washes, carnivals or donation drives … not exactly enough to cover the projected $30+ million dollar expense, but certainly a symbolic way to show community involvement.

Student Kyle Troung acknowledged constructing a new school would “cost a lot of money.” If it does turn out to be too much, Kyle said, at least time should be added to the end of the school day at other buildings, so 5th Ward children and kids from other parts of town “could play and get to know each other more.”

The District 65 board of education is already in favor of a new 5th Ward school, at least in principle, although no final decisions have yet been made.

Emma’s mother, Tone Stockenstrom, told Evanston Now her daughter was “nervous at first, but afterward she was really happy about the opportunity to speak.”

The chance to be heard, Stockenstrom said, “sends a powerful message to young people to be given a voice at the table.”

Superintendent Devon Horton, who invited the children to the board meeting after hearing their letters in class, said it was “an honor” to have the 5th graders at the board session.

Dealing with the lack of a 5th Ward neighborhood school, Horton said, “is a problem we adults haven’t been able to solve in 52 years.”

Perhaps some young lobbyists are helping to find an answer.