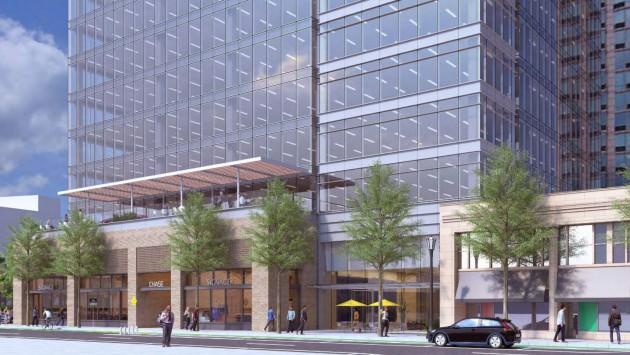 Vermilion Development’s plan for a 19-story office building at 601 Davis St. will start Evanston’s formal approval process at a Wednesday afternoon meeting of the Design and Project Review Committee.

The company projects that the building will increase annual real estate taxes on site — which consists of a vacant lot and a bank drive-thru — from just over $50,000 to $1.43 million.

It also projects the city will see more than $1 million in one-time permit fee revenue from the project and an increase fo $175,000 in annual sales tax revenue.

The developers had previously planned to restore and modernize the two-story University Building the northwest corner of Chicago Avenue and Davis Street as part of the project.

But the latest submission to the city from the developers says that parcel is no longer part of the zoning lot for the project and upgrades to that property are no longer within the project’s scope of work.

The new building would incorporate ground floor retail space and a replacement drive-thru for Chase Bank as well as 150 interior bike parking spaces.

The developers plan to include parking for 40 cars in the project. That’s far below the 414 spaces that city staff says are required under the zoning code. The developers are proposing also leasing 78 parking spaces either at the city’s Church Street or Sherman Plaza garage.

City staff, in comments on the proposal, suggest that a parking level similar to that in downtown Berkeley, California, — said to range from 0.25 to 1.25 spaces per 1,000 square feet of office space — would be appropriate. That would imply providing somewhere between 62 and 308 spaces for the 601 Davis development.

The project will ultimately require a two-thirds majority vote of the City Council for approval because the proposed 13.0 floor area ratio for the project exceeds the 8.0 maximum that can be approved by a simple majority vote under the zoning code. But before it gets there it will also be reviewed by the city’s Plan Commission.