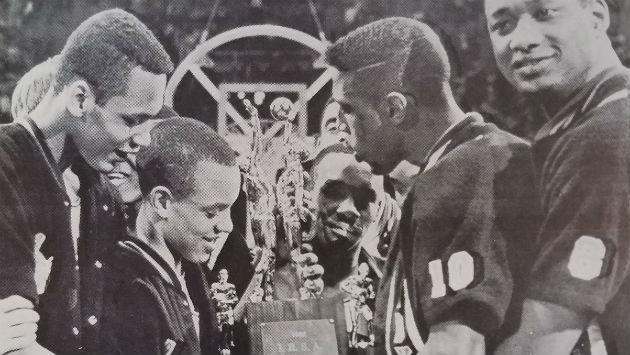 Evanston’s 1968 Illinois High School  Association state basketball champions are celebrating the 50th anniversary of that once-in-a-lifetime accomplishment and will be recognized in a ceremony at halftime of Saturday night’s game with Oak Park-River Forest at Beardsley Gymnasium.

The rest of the state of Illinois — at least the schools that play basketball — should join in that celebration, too, because that Wildkit team is the one that helped usher in a new era of basketball in one of the nation’s hotbeds of high school hoops.

Under head coach Jack Burmaster, Evanston swept to the state title with a final record of 30-1, relying on a combination for strong rebounding and in-your-face defense that marked a style of play not seen much previously in the state of Illinois. 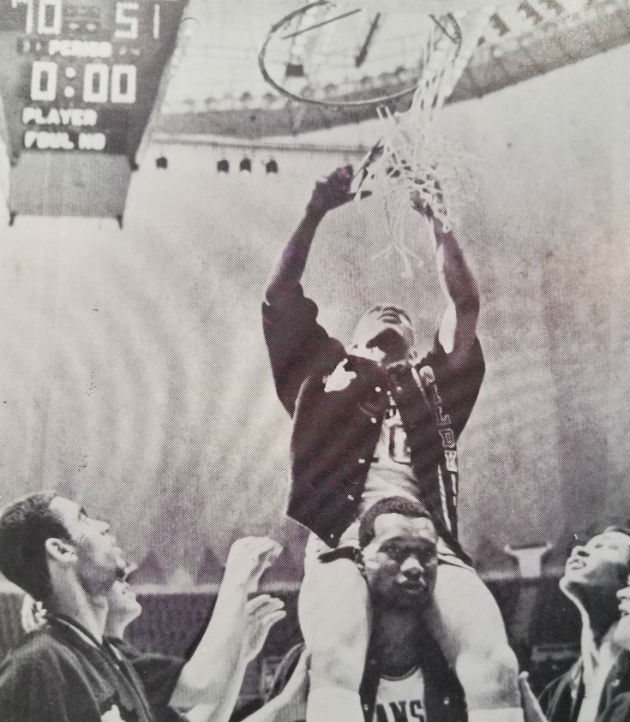 Walt  Perrin cuts down the championship nets at the 1968 Illinois High School Association state tournament in Champaign, with a boost from teammate Farrell Jones. (ETHS photo)

State tournament play had been dominated — with the exception of Chicago Marshall in 1960 and Harvey Thornton in 1966 — by southern Illinois schools who relied on slower, less athletic players who could shoot the lights out of any gym, especially the Assembly Hall in Champaign.

That season, almost every rival coach described Evanston’s squad as the best rebounding foe they faced all year, led by 6-foot-6 Farrell Jones and 6-3 jumping jack Bob Lackey. Add the defensive pressure applied by guards Walt (Pookie) Perrin and Ron Cooper, and the shooting ability of Bill Battinus, and you had the recipe for a near-perfect season.

Evanston’s state champs are still recognized as one of the best teams ever to rule the IHSA state tourney. They dropped only one regular-season contest — a 55-52 loss to a Proviso East squad that returned to capture its own state crown in 1969 — and rolled over their last four tournament foes to capture the big trophy for the only time in school history.

The Wildkits dispatched Lockport Central 70-58 in the supersectional at McGaw Hall in Evanston, then overpowered  Peoria Central (70-48), Crane Tech (70-54) and Galesburg (70-51) at the Assembly Hall. Their style of play, although they didn’t know it at the time, provided the model for most of the future state champs to follow.

Jones had already made a name for himself as an All-State tackle in football for the Wildkits and Lackey played bigger than his 6-3 frame, eventually starring at Marquette University. But Burmaster, who also took ETHS teams to the Elite Eight in 1957, 1964 and 1972, didn’t necessarily appreciate the “physical” tag that was applied to the Wildkits that season because he felt that the players should receive as much credit for their hard work and preparation that year as for their physical skills.

In a 1993 interview, Burmaster recalled that the state had never quite seen a team quite like those Wildkits.

“Up until then, most of the state champions had been slow, methodical, good-shooting teams,” said Burmaster. “A lot of people used that term physical, and we certainly were strong on the boards, but we had quite a bit of finesse, too. To a degree I resented it when people, especially Downstate, described us that way. It wasn’t just God-given talent. We worked hard in practice on rebounding and on blocking out.

“That year was a line of demarcation between the old way of playing and the new. We didn’t play pitty-pat ball, and ever since then state champions have played the way we did.”

“When people said we were physical, I took that as a compliment,” said Perrin. “We were also very skilled and that made for a pretty tough combination to play against. That group was the start of a more physical brand of basketball. We didn’t push and shove people around. We just used our strength underneath, and got up into people’s faces on defense.

“I’d pick up full-court (on defense) and so did Ron Cooper. Odell Johnson (6th man) would do the same thing when he came into the game, and most teams weren’t doing that, except maybe for some that came out of the city. We played good defense as a team. We just had a great mix with that group. We were able to use our skills and just overwhelm people.”

“I think that team, with the way we played, was a little ahead of its time,” noted Mike Hart, a junior reserve for the champions who later coached the Kits to Elite Eight appearances in 1986 and 1988 and was an assistant coach for the 1984 squad that placed second in the state. “The teams from southern Illinois played a very deliberate game, they didn’t throw it up on the glass and let their horses go get it like we did. And no one got up in your jockstrap on defense like we did, either. It was part of the evolution of the (high school) game, and it was a lot of fun to play that way.

“I had to play against Lackey every day in practice and I knew where his elbows were at all times. He’d tell me what he was going to do, with a smile on his face, and I still couldn’t stop him. He and Farrell would just tip the ball back and forth until they scored. Our starters were all rock solid and they shellacked guys like me and Alvin Keith and Alton Hill every day in practice.”

Hill recalled that it wasn’t just physical ability that allowed the Wildkits to turn in weekly dominant performances on defense and on the boards. They practiced, practiced and practiced harder to refine those skills.

“We had the mindset to succeed every day in the classroom, on the court and in the community,” Hill explained. “It wasn’t easy, and I’m glad that it wasn’t easy. We were challenged every day in practice. Other teams would play hard and eventually run out of gas, but our tank was always full.

“We always practiced offensive and defensive rebounding in our daily drills, and not just for 4 or 5 minute sessions, usually for 15 to 25 minutes every day. Jack Burmaster’s philosophy was to start games strong and to finish strong. We never let up. Most teams didn’t expect that and they weren’t ready for it when they played us. That’s what gave us an edge.”

Burmaster laid the foundation for that state title when he kicked four players, including Lackey, off the squad for disciplinary reasons the previous season. The Kits learned a lesson from that, and Lackey was a double-double (points and rebounds) machine along with Jones as they reeled off 19 straight wins to open the season before stumbling at Proviso East.

The Wildkits had edged East 50-48 in overtime in the championship game of the Proviso West Holiday Tournament and had come back the next week to edge the Pirates 56-53 in a Suburban League contest. Yet even 25 points by Lackey in that third meeting weren’t enough for ETHS to pull off a victory in a gym that is still tough for any visiting team to win in to this day.

“Losing that game didn’t deter us,” Perrin said, “it just gave us the determination to get better. I remember that Battinus was sick that night, and we had some foul trouble, too. There was some outside noise before the game, too, people talking about fights and going after us on the court. I think that threw us off-kilter a little bit. But even after that loss we still felt we were the better team.”

Perrin made sure the Kits bounced back a week later. The senior guard sank two free throws with 5 seconds remaining to nail down a 56-55 win at Waukegan, a win that clinched the Suburban League championship. Evanston rallied from an 8-point deficit as Jones connected on 8-of-9 field goal attempts for a team-high 18 points.

No team could come close to the Kits after that. They were only ranked sixth in the final regular season Associated Press state poll, but brushed aside every challenge in the postseason. Lackey tied a state tournament record with 23 rebounds in the semifinal triumph over Crane, and he was a unanimous choice for the all-tourney team. Jones also earned an all-tournament nod in Champaign.

“We had confidence in our ability to play well and win Downstate,” remembered Perrin. “We were very consistent in our play down there, and it’s hard to do that on that type of stage.

“I’ll never forget the parade coming home and watching all of those people line the streets. I am a bit surprised that we’re the only team from Evanston to win it. It’s a point of pride for all of us and everything just came together for us that year.”