Evanston’s site plan committee voted unanimously this afternoon against a request from 7-Eleven Inc. to operate its store at 2536 Ewing Ave. 24 hours a day.

But the committee voted to support the special use request needed to continue the store’s operation after its purchase by 7-Eleven as part of its acquisition of the White Hen convenience store chain.

The vote came after two neighbors — Charles Barkling of 2923 Lincoln St. and Jim Hughes of 2518 Hartzell Ave. — spoke against the plan, saying the store was far too close to nearby homes to justify all-night operation.

The neighbors said they appreciate having the store nearby, and don’t mind that it is currently open until midnight, but feared problems with noise and loitering if it stayed open later. 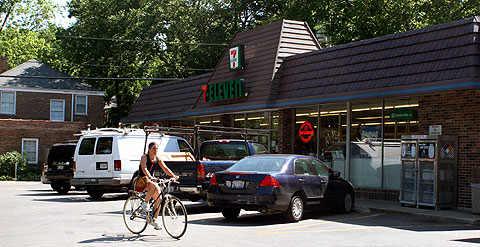 Interim Community Development Director Dennis Marino said he thinks the existing midnight closing hour "is a little late as is."

And Zoning Director Bill Dunkley said he had received many calls and letters from neighbors, all opposing 24-hour operation.

The proposal now goes to the Zoning Board of Appeals and ultimately will require action by the City Council.