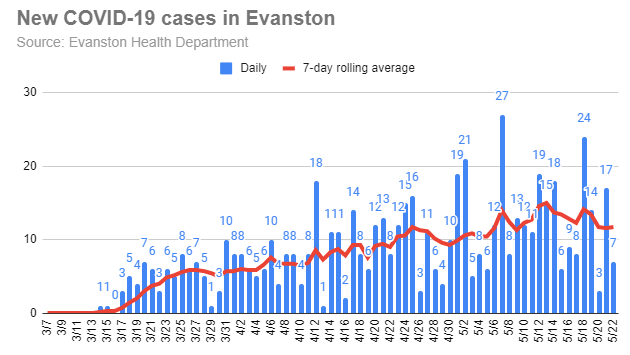 The number of people in Illinois hospitalized with COVID-19 symptoms again dropped below the 4,000 mark as of midnight last night to 3,928.

State Health Director Dr. Ngozi Ezike reported that 1,060 of those patients were in intensive care units and 589 of them were on ventilators.

The state reported results of a total of 25,113 new coronavirus tests today, the third highest testing total since the pandemic began. In all 11% of those tests returned positive results

The IDPH reported results of 132 tests of Evanston residents with 11 positive results, a number diffferent from that reported by the city. The IDPH report would reflect a 8.3% positive rate for Evanston tests reported today.

At his news conference this afternoon, Gov. J.B. Pritzker unveiled details of plans for reopening additional day care facilities so that more parents will be able to return to work assuming the state moves into Phase 3 of the Restore Illinois plan, as expected, on May 29.

He and Dr. Ezike also urged residents to avoid having traditional gatherings over the upcoming Memorial Day weekend that would increase their risk of exposure to the disease.