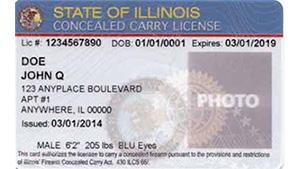 State police last week said they were starting to send out the first of the licenses across Illinois.

Of the 73 applicants here, Evanston Police Cmdr. Jay Parrott said this morning six have been approved and six have been denied and the rest are still being processed.

The numbers so far indicate that about 0.4 percent of residents statewide have applied for the concealed carry permits, compared to just 0.1 percent of Evanston residents.

Parrott said that police don't plan any particular change in their practices as a result of implementation of the new concealed carry law.

But he noted that concealed carry permit holders would be in violation of the terms of their license if, when asked by police, they fail to disclose that fact.

And he said information about the permits is linked to drivers license records so that if officers pulling over a car run the license plate on their computer they'll get back information indicating that the owner has a concealed carry permit.