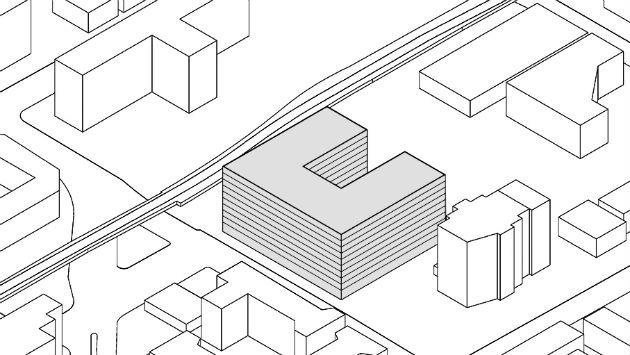 Developers of the proposed 831 Emerson St. high-rise in Evanston went to a third neighborhood meeting on the project Tuesday night armed with a drawing showing what the city's zoning code would permit it to look like if they get the zoning change they want but were required to reduce the building's height.

The site is currently zoned C1 — which would permit a maximum height of 60 feet. But that zoning also bars residential uses — which would completely preclude the sort of project Focus Development is seeking.

Given the lack of developer interest in recent years in constructing new offices downtown, it could also mean the site — now home to a dry cleaners and a convenience store — would not be redeveloped at all.

The developer is seeking C1a zoning — which permits a mix of commercial and residential uses. That zoning authorizes planned developments up to 97 feet tall — or as much as 10 stories.

The building also could be constructed with no front-yard setback and a permitted floor area ratio of 5.5 and well over 200,000 square feet of space — leading to the simple U-shaped design shown in the drawing, Tim Anderson, president of Focus Development, said, as he projected the drawing on a screen in the community meeting room at the Evanston Public Library.

A similar drawing showing the design proposed by the developers.

Instead, the developers have asked for several variations to be able to build a structure that would be divided into three differents sections, with heights of 14, 11 and 9 stories and setbacks from the street of zero, 20 and 40 feet.

The as-of-right development would be limited to a maximum of 169 units. The developers are seeking to construct 287 units — which would be much smaller than typical apartments in Evanston. They would be rented fully furnished to a target market consisting largely of students.

The as-of-right drawing was requested by speakers at a previous community meeting.

Anderson has claimed that the new development, as proposed, would generate an additional $1 million in annual property tax revenue to local governments and has said he's willing to sign a covenant that would bar removing it from the tax rolls were it to be later sold to Northwestern University or another non-profit entity.

Winning City Council approval of the zoning change will require a two-thirds majority vote, the same vote margin required to approve the additional variations the developer is requesting.

In voting to recommend approval of the project two weeks ago, the city's Design and Project Review Committee called for an unspecified reduction in the building's height.

Anderson said Tuesday he wants to wait until after the project get gets feedback from the city's Plan Commission before deciding whether the reduce the proposed height.

The Plan Commission is scheduled to begin its review of the project at 7 p.m. on Wednesday, Dec. 9.