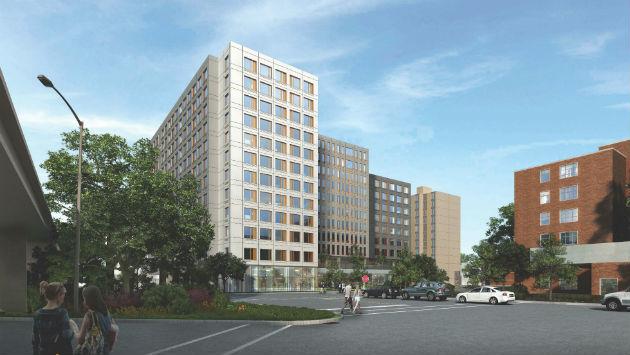 The Evanston Plan Commission unanimously approved and sent to the City Council an apartment rental project at 831 Emerson St. that drew strong opposition from residents of a neighboring development.

The developer told the commission at its meeting Wednesday night that it had agreed to lower the height of the building from 14 stories to 12 stories, which would reduce the number of units from 287 to 267.

As part of the deal, the developers agreed to make a contribution to the city of $500,000 for affordable housing purposes and to contribute $56,000 in sponsorship funds towards Divvy bicycles in Evanston.

The meeting Wednesday was a continuation of a public hearing that began last month. Many of the speakers had signed up to testify in December, but that session was recessed due to time considerations, so they were allowed to speak on Wednesday.

Most of the public speakers were senior citizens who lived in a nearby co-op project who testified that the 831 project, that developers said would be marketed to students at nearby Northwestern University, was not suitable for the area and might not be financially feasible.

None of the public speakers testified in favor of the project.

A spokesman for the developers said the project, while unique in Evanston, has been a successful concept in other college towns, such as Madison, Wisconsin, and Champaign, Illinois

The units would be smaller in square footage than typical apartments and would be leased by separate bedrooms to accommodate roommate arrangements that fluctuate as individual renters graduate or take study opportunities abroad.

But he said they could not legally discriminate against non-students and that some 15 to 20 percent of the tenants could quite possibly be young professionals who would be unable to afford something larger, but would be attracted to Evanston because of its proximity to public transportation.

After reviewing the standards that, under city ordinances, had to be met if the special use and zoning variances could be granted, the commission voted 7-0 to recommend approval to the City Council, which has final say in the matter.