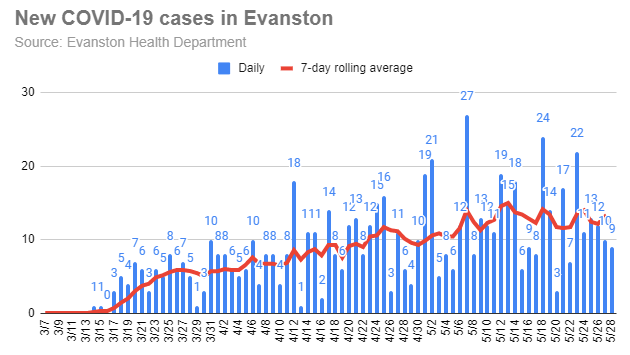 On the eve of Illinois moving into a new phase of reopening from the COVID-19 pandemic, Evanston reported nine more coronavirus cases today for a total of 697 persons sickened by the disease and the death toll among city resident rose by four, to 38.

The Illinois Department of Public Health reported results of tests on 81 additional Evanston residents today, of whom 7 tested positive, for a positive rate of 8.6%. Five of the seven positive results came from south Evanston, the 60202 ZIP Code, and 46 of the tests were conducted there. The state test numbers tend not to exactly match those reported by the city.

At his news conference this afternoon, Gov. J.B. Pritzker pointed to the progress made against the disease so far and said that if residents continue their efforts to be careful by wearing face coverings, washing hands, maintaining six-foot social distancing, disinfecting surfaces and using hand sanitizers there’s reason to hope the state will be able to move from the new Phase 3 on Friday into Phase 4 by June 26.