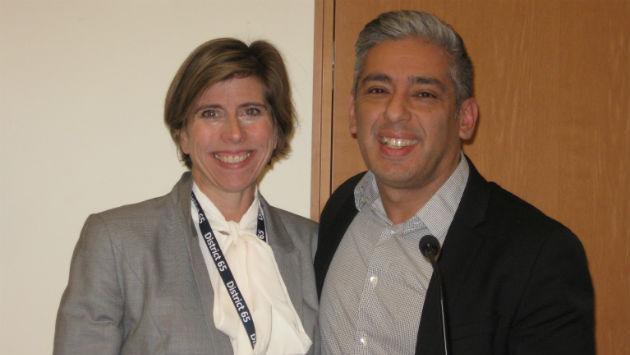 The Evanston/Skokie School District 65 Board of Education installed a new board member from the Latino community, passed a “safe haven” resolution to protect immigrant students, and discussed a newly released report on Hispanic Student Achievement at its regular meeting Monday night.

The new board member, Sergio Hernandez, Jr., was elected unanimously by the board to complete the remaining two years of the term of Richard Rykhus, who resigned after the last board meeting.

Hernandez’ first vote after assuming his seat at the board table was in favor of a resolution declaring District 65 schools as “safe havens,“ where legally permissible, for students from federal immigration officials.

The resolution was virtually identical to one passed last week by the Evanston Township High School District 202 Board and is consistent with an Evanston City Council declaration of Evanston as a “sanctuary city.”

The report on Hispanic Student Achievement was presented to the board by the district staff later on the agenda.

The resignation of Rykhus prompted some realignment of committee responsibilities, as Rykhus was chair of the Finance Committee and vice president of the Board.

Hernandez was named to the Finance Committee, and Tracy Quattrocki, a former board president, was named chair of that committee. The board selected Claudia Garrison to be its new vice president.

Hernandez was also named to be one of the board’s representatives on the Park School Advisory Board. The school is a joint collaboration with the District 202 board that provides educational services to special-needs students.

The new board member has more than 12 years of experience as a PreK-8 bilingual/English as a Second Language (ESL) educator. He is also an advocate for early childhood services and has served as an Illinois Early Childhood Fellow.

Hernandez has also advocated for racial and educational equity through work with community organizations, including Latino Resources and Organization for Positive Action and Leadership (OPAL).

As a result of his appointment, Hernandez plans to withdraw his name from the April 2017 election ballot, according to a district spokesperson.

The Hispanic Student Achievement Report presented a statistical picture of the Hispanic community’s involvement in the school system.

About one in five district students are identified as Hispanic, and they are about 75 percent more likely to live in low-income households and about three times as likely to be “English learners” than the average district student, according to the report.

Some 46.5 percent of Hispanic students enter the school system with the level of early literacy skills that are considered “kindergarten ready,” compared with a district average of 57.8 percent.

Just last week, the district hired Dr. Elizabeth Cardenas-Lopez, who most recently served as an assistant principal at Inter-American Magnet School in Chicago, as its new director of literacy. She is fluent in both English and Spanish.