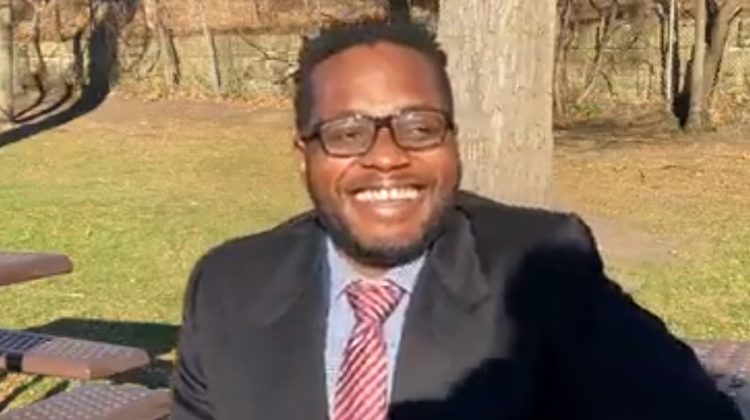 Devon Reid, in a Facebook Live video this afternoon.

Devon Reid got a big discount this week. The Evanston city clerk owed the Illinois State Board of Elections $30,105 for campaign finance reports he’d failed to file from his 2017 race for the clerk’s job.

Unless such a fine is paid, a candidate cannot run for anything, and Reid has announced his candidacy for 8th Ward alderman next spring.

But Monday, the State Board accepted a settlement payment offer of $4,000. Reid has until the Dec. 17 ballot certification date to actually pay the reduced amount. If he does so, he can then run for Council.

Tom Newman, director of the State Board’s Campaign Disclosure Division, tells Evanston Now that Reid told the Board his campaign office closed following the 2017 election, and Reid said there was no new spending or fund raising after that.

While new reports wrapping things up should have been filed with the State anyway, Reid’s campaign office closed without a forwarding address. So the State’s letters inquiring about the missing reports did not get a response, and the unpaid fines kept getting bigger and bigger.

Newman says the Board apparently was satisfied that “all the fines resulted from one mistake,” so $4,000 was an acceptable offer.

In a Facebook Live event this afternoon, Reid said the failure to file finance reports on time was an “honest error,” which occurred when his campaign committee for the clerk’s race was being closed out.

Reid said the Board of Elections was going to reduce the fine to $15,000, but he was able to persuade them to accept only $4,000 due to the “mitigating circumstances” of why the reports were not filed.

Reid said the Board of Elections is a bi-partisan body, and he said “I tend to do well with independent boards.”

The Facebook Live event was hosted by local political activist and Ridgeville Park District board member Dan Coyne, who backed Rainey’s opponent in the 2017 race and more recently filed an ethics complaint against her that was dismissed by the city’s Board of Ethics.

Assuming Reid pays the reduced fine, he will join Rainey and Matthew Mitchell in seeking the 8th Ward aldermanic seat next spring.

The State Board of Elections says at least two other candidates from Evanston’s 2017 election have outstanding fines from failing to file the proper reports, but neither of those people have announced plans to run for office in the 2021 election.