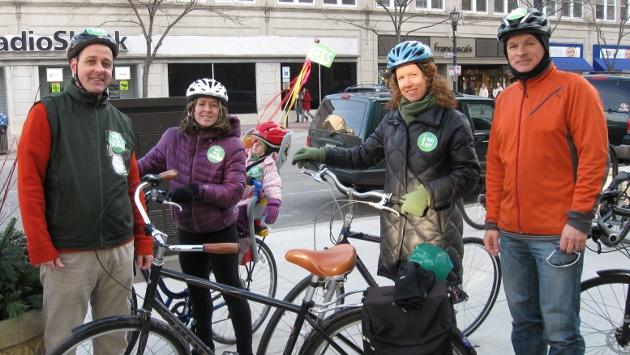 Even though temperatures were in the low 30s, an intrepid group of Evanston bicyclists took off from Church Street and Sherman Avenue Friday afternoon for a bike ride around downtown Evanston, in part to thank the community for providing protected bike lanes on Church and Davis streets.

John Jacobs, an avid cyclist, has been instrumental in advocating that communities along the North Shore be mindful of bikers as they institute their traffic plans.

He noted that eastbound bikes on Church have difficulty executing a left turn off the one-way street without crossing the paths of two lanes of vehicular traffic. He said that motorists, pedestrians, and cyclists all need to give up some conveniences if all forms of traffic are to co-exist in harmony with one another.

"In order to make bicycling infrastructure significantly safer in Evanston," he declared, "we will need to give up some of the space that the automobile currently occupies."

Jacobs was particularly complimentary towards the city’s decision to place the bike lane at curbside, with the parking lane on the traffic side.

"The motorist is not the problem for bikes," he said, "It is the parked cars." He noted that doors that open suddenly in front of a cyclist are a real danger to the riders. By placing the bike lane at curbside, he said, it minimizes the chances that a cyclist will run into a car door.

Nevertheless, significant safety problems exist at the intersections, he said, particularly with cars making right turns in front of bicyclists.

The bike-and-shop event, he said, emphasizes the benefits a viable bike plan provides for merchants in the community.

“People on bikes typically don’t buy as much as they would when in their cars,” he said, “but studies have shown that they make more shopping trips, particularly to merchants located near their homes.” 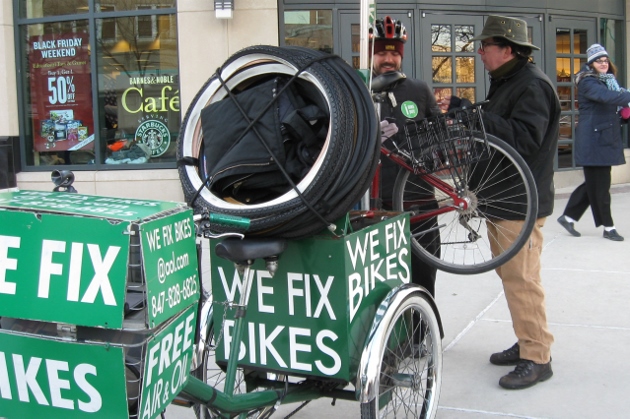 When the cyclists assembled at Church and Sherman Friday afternoon, they were met by mobile bike repairman Curtis Evans, whose shop on wheels bears a large sign reading “We fix bikes.”

Evans, who worked in a traditional bike shop before he launched out on his own, is a familiar figure in biking circles in Evanston, particularly on the Northwestern University campus, where bikes are a popular means of getting around.

Evans said he originally thought business would be best in the affluent areas of north Evanston, but found that people who live in central Evanston rely more on their bikes as a substitute for the automobile.

Jacobs said he hopes to repeat the "bike and shop" event each Saturday until Christmas, weather permitting, starting in downtown Evanston on Saturdays at 2 p.m., and to resume the events next spring.