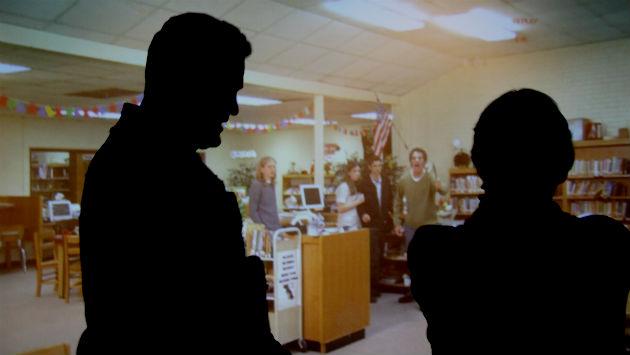 I died several times the other day. Or I would have if I’d been in actual situations instead of training scenarios at the Evanston Police Department.

I was there to try out for myself the training officers go through annually to refresh and further develop their responses to threatening situations which might require the use of deadly force.

The Meggitt firearms-training simulator uses interactive high definition videos to assist officers in judgment and decision making skills, and uses replicas of handguns that have been converted for use as a simulator. It is owned by the not-for-profit North East Multi-Regional Training, Inc. that provides training services for police agencies in the Chicago metro area.

The equipment circulates among several police departments. It is currently spending a month at the Evanston Police Department.

Scenarios are projected on a wall-size video screen, and can be changed by the training officer as the situation develops in response to the officer’s actions. When the “guns” are fired, the system provides feedback on where the shots go, and also can determine if the officer is shot or stabbed by a suspect. The officers are rated for each scenario in four areas: judgment/use of force, accuracy, use of cover, and verbal commands.

I participated in five scenarios, including two traffic stops, a call about rowdy teenagers, an argument in a parking lot, and a teen with a knife threatening students in a school library. Training Officers Joe Panek and Will Arzuaga told me the most dangerous situations officers face are “routine” traffic stops and domestic disputes. 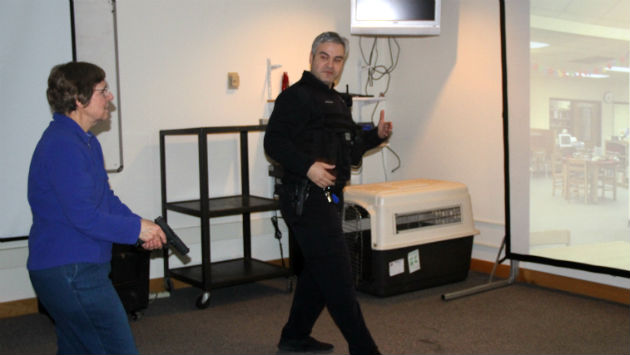 Vicky Perlman gets some advice from Evanston Police training officer Will Arzuaga.

It was an eye-opening experience. Things happen very quickly and the decision on whether to shoot must be made in a split-second. I managed to correctly take down one suspect, though I’m sure that was more luck than skill. I missed another suspect who was shooting at me, shot an innocent bystander and was shot or stabbed several times when I didn't respond quickly enough.

It is amazing how quickly a suspect with a knife can close what seems to be a safe distance.

The scenarios and especially the feedback from Officers Panek and Arzuaga gave insights to the myriad concerns officers must consider when confronting suspects.

Is the suspect a threat to himself, to others nearby, or to the officer and his partner? Where is your partner located? Will that guy who ducked back in the house when the police arrived come out with a gun? Should you call for backup? The suspect’s hands are in his pockets – is there a weapon there? Are there innocent people in the area who might be accidentally injured or killed? Is the suspect drunk or mentally unstable? Is there cover available where the officer might protect himself if necessary?

All these things and many others must be answered in a split-second.

Tunnel vision is a major issue. As I found out, when one’s life is in danger, it’s very easy to focus on one person with a weapon and not think about what’s going on outside that area and who else is either in danger or could be another threat.

Officers go through repeated scenarios to learn to control natural reaction to the adrenaline rush and be able to perceive the peripheral details and anticipate broader consequences. Regularly practicing varying use of force scenarios helps them to avoid tunnel vision, rapidly consider all elements of the situation, and develop the skills to more instinctively respond correctly.

Even knowing it wasn’t for real didn’t stop my heart from pounding or my mind from racing. It gave me a deep appreciation for what police officers face daily and a new respect for the work that they do. It was truly enlightening.